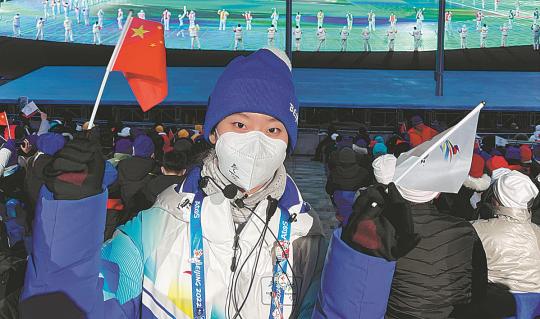 Zhang Yi holds the Chinese and Olympic flags at the opening ceremony of the Games on Feb 4. (PHOTO/CHINA DAILY)

Amateur figure skater Zhang Yi has been in a state of high excitement as a result of serving as a volunteer usher at the opening ceremony of the 2022 Beijing Winter Olympic Games.

However, it is hardly surprising that Zhang became a volunteer at the gala event, because she has been involved with winter sports since childhood.

"I remember that when I was a kid, my parents took me skating at Shichahai Lake, and also Kunming Lake ice rink in the Summer Palace, in Beijing when winter came," she said.

She chose to become a figure skater after watching Shen Xue and Zhao Hongbo, figure skaters for the national team, who won the gold medal at the 2010 Vancouver Winter Olympic Games.

"That moved me, so I decided to try the sport. Back then, figure skating was not all that popular, but I've seen more people joining in at events since Beijing was awarded the right to host the Winter Olympics (in 2015). Thanks to people's growing passion for figure skating, my peers and I had better places to train because more topquality ice rinks were built in Beijing," she said. 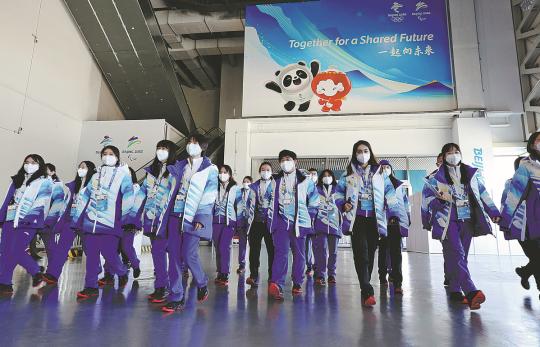 The versatile skater is also an experienced volunteer. She registered with the Beijing Volunteer Services Federation, a nonprofit social organization, when she was in junior high school. Now a student at the Central Academy of Fine Arts, she said that being a volunteer at the Games is the best way for her to engage with the sporting gala.

To serve as ushers for audience members, athletes who had finished delivering their oaths, judges and officials at the opening ceremony, Zhang and her peers were subject to closed-loop management and strict training long before the Games opened on Feb 4.

"I was excited to take up my mission at the National Stadium, where I will witness two opening ceremonies and two closing ceremonies: for the 2022 Beijing Winter Olympic Games and the Paralympic Winter Games," she said.

Her initial excitement was followed by nervousness. "But the 'manners training' we had before the opening ceremony did me a great favor as it helped me calm down and finish the mission," she said.

For Zhang, being an usher is not just about guiding athletes or officials to their seats, but a glorious moment worthy of being remembered for a lifetime.

"The people we guided were only a few meters from their seats, but every step I made took me closer to my dream," she said. "I felt that my efforts and hard work had paid off as I guided those wonderful athletes to their seats. That memory will stay in my mind forever.

"My family members and friends sent me a screenshot of the opening ceremony, when I was totally focused on my guiding work. I was concentrating fully at the time as it's an honor for me to be a volunteer at the Bird's Nest stadium."

When Zhang and her peers were preparing for the closing ceremony, she said it would be another challenge, demanding strong nerves and high morale.