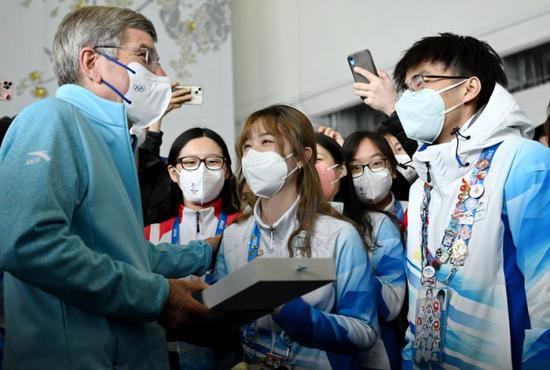 The International Olympic Committee (IOC) has awarded the Olympic Cup to the Chinese people in recognition of their support for the Beijing 2022 Olympic Winter Games, IOC President Thomas Bach announced during the 139th IOC session here on Saturday.

"The Beijing 2022 could not have achieved this level of excellence without the support of the Chinese people. We could feel their warmth, energy, hospitality and support. They were greatly committed to the success of the Games," Bach said.

"Chinese people from all walks of life, across all generations, from the cultural world, artists, scientists, engineers, school children and the thousands of volunteers, all welcomed the athletes and us very warmly. This was truly heart-warming and crucial for the success of the Beijing Winter Olympics," he added.

This special recognition of the Chinese people followed the final reports by the Beijing 2022 organizing committee and Juan Antonio Samaranch Jr., the Chairman of the IOC Coordination Commission for Beijing 2022, to the IOC session before the close of the Beijing Winter Olympics on Sunday.

After Beijing 2008, the IOC also awarded China the Olympic Cup, acknowledging its great contribution to the Olympics.