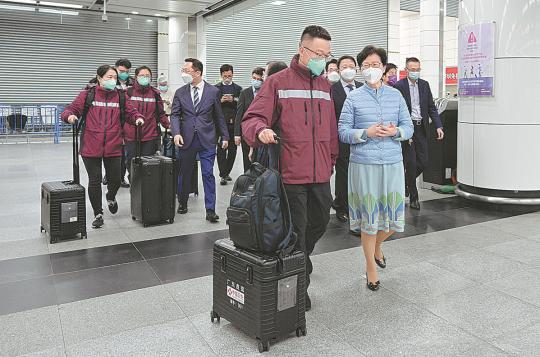 The Chinese mainland has scaled up its support to Hong Kong as the special administrative region went all out to get a grip on the spiraling COVID-19 outbreak, with a team of medical experts and mobile testing labs arriving in the region on Thursday afternoon.

Mainland authorities, led by the Hong Kong and Macao Affairs Office of the State Council and the National Health Commission, have set up a special task force to coordinate efforts to support Hong Kong's efforts to contain the fifth wave of the pandemic.

Wang Hesheng, head of the National Administration of Disease Prevention and Control, arrived in Shenzhen, the city bordering Hong Kong, on Wednesday to coordinate the mainland's health assistance efforts, including sending a team of public health researchers and mobile testing laboratories.

The team of experts sent by the mainland to Hong Kong on Thursday will assist with the region's pathological research and share experience in contact tracing, Shenzhen Television reported.

Hong Kong reported a record 6,116 confirmed cases on Thursday, up from 4,285 from the previous day, with a further 6,300 preliminary positive cases pending confirmation. The region also reported 24 new deaths from the coronavirus.

On Wednesday, Beijing sent its seventh consignment of COVID-19 vaccines, which totaled 1.25 million doses, to the SAR, as the region beefed up its vaccination efforts, including lowering the minimum age for receiving the vaccines to 3 years old starting on Tuesday.

The mainland has also beefed up the supply of fresh agricultural produce to Hong Kong, with the wholesale price of vegetables continuing to drop on Wednesday, according to the SAR's agriculture, fisheries and conservation department.

Hong Kong Chief Executive Carrie Lam Cheng Yuet-ngor on Thursday expressed gratitude for the concern and support from the mainland, saying that she would lead the SAR in fighting the epidemic with unwavering determination by leveraging the central authorities' support and uniting all sectors of the community.

Lam said the outbreak's development has "outgrown the SAR government's handling capacity", and she submitted to the central authorities "a report together with concrete requests for timely assistance".

She said on Thursday that the team of experts from the mainland will stay in Hong Kong for four days, and the SAR government is aiming to increase its daily testing capacity to 300,000 per day before the end of the month.

With the strong backing from the central government, the SAR can get through the outbreak, she said.