Xi inspects Shanxi ahead of festival 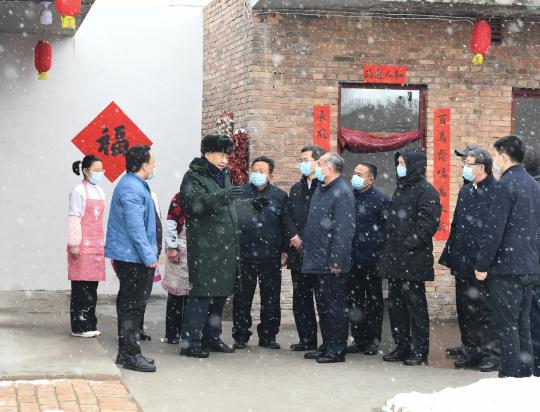 President Xi Jinping, who is also general secretary of the Communist Party of China Central Committee, talks on Wednesday with villagers in Huozhou, Shanxi province, during his inspection of the province ahead of Chinese Lunar New Year, which falls on Tuesday. (XIE HUANCHI/XINHUA)

Modernization of agriculture, rural areas should be prioritized, he says

For 10 years in a row since he became general secretary of the Communist Party of China Central Committee in 2012, Xi Jinping has made it a tradition to visit people at the grassroots level nationwide, especially disadvantaged groups, ahead of Chinese Lunar New Year, or Spring Festival.

With the most important Chinese festival starting on Tuesday, Xi, who is also China's president and chairman of the Central Military Commission, started his annual festive tour to meet the people on Wednesday. This time, he chose North China's Shanxi province as his destination.

The inspection tour, which concluded on Thursday, took him to visit villagers, workers engaged in cultural relics protection and energy supply, and officials working at the grassroots level in southern and central parts of the province.

On Wednesday afternoon, Xi went to two villages, where he visited villagers' homes and inspected post-disaster reconstruction in areas affected by last year's floods, as well as local work in restoring farming, ensuring the public's access to heating in winter, consolidating and expanding anti-poverty achievements, and advancing rural vitalization.

In Fengnanyuan, a village in the city of Huozhou, which was hit hard by severe flooding last year, Xi told the villagers he came to see how much the disaster had affected their lives, and he was gratified that the villagers have weathered the storm and made achievements in the reconstruction of their homes through local governments' help and their own efforts. He wished them a happy Spring Festival.

Speaking to residents of Duancun village of Fenxi county, who came to welcome him, Xi said that in governing the country, the CPC has no other option but to do something good for the people, wholeheartedly serve the people, and make every effort to ensure the people can pursue a happy life.

As the new journey has begun toward the second centenary goal of comprehensively building China into a modern socialist country, Xi said agricultural and rural areas' modernization should not be left behind. Farmers' lives will be better and better, he added.

Putting people first has been at the center of Xi's governance philosophy. Every time he has conducted inspection tours nationwide in recent years, he has chatted with locals to learn details about their lives, including their incomes, housing situation, healthcare, children's education and old-age services, and has seen how the Party's and government's policies have been carried out to benefit the people.

"Our country, big as it is, also has its list of priorities. The myriad of things we attend to all boil down to matters concerning every household. ... Every time I visit people in their homes, I would ask if they have any more difficulties, and I would remember everything my folks have to share with me."

Cai Wenming, 62, a farmer from Duancun village, was excited to see Xi, the country's top leader, visiting his home on Wednesday afternoon. "General Secretary Xi was very affectionate. He asked me in great detail about how we had prepared the food and other goods for Spring Festival. He asked me how much income I can earn from raising sheep," Cai said.

Cai said that although the general secretary is busy taking care of 1.4 billion people in the country, he nonetheless spends time visiting a mountainous village to see in person what local farmers' lives are like, and whether the villagers who were lifted out of poverty one year ago live a better life now. Cai added that he was very thankful for Xi.

Li Jiali, the village's Party secretary, said Xi's visit inspired her a lot. "As a grassroots-level official, I will be more down-to-earth to work for my villagers, always putting the people's interests in my heart," she said.

In addition to people's lives, Xi also paid much attention to the province's high-quality development.

During his visit on Thursday to Pingyao county, which is famed for its importance in Chinese economic history and for its well-preserved urban planning and architecture in Ming and Qing dynasties (1368-1911), Xi emphasized the importance of preserving cultural relics and upholding cultural confidence.

Inspecting a coal-fired power plant in the city of Jinzhong, Xi underlined the need to promote low-carbon development of the coal sector while ensuring the energy supply to contribute to the country's carbon peak and carbon neutrality goals.

He also urged Shanxi to fully follow the decisions and policies made by the CPC Central Committee, comprehensively and faithfully implement the new development philosophy and make coordinated efforts in COVID-19 pandemic response and socioeconomic development.