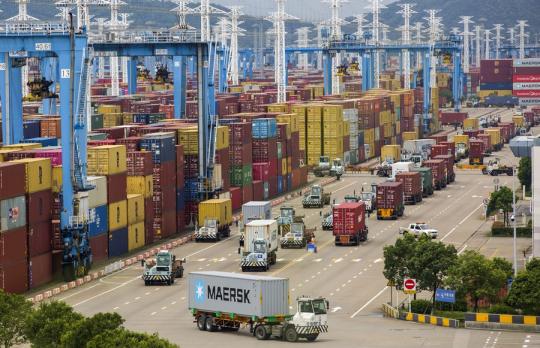 President Xi Jinping has urged farsighted businesspeople from China and the United Kingdom to uphold the "ice-breaking spirit", and keep expanding mutually beneficial cooperation between the two countries to help promote bilateral ties.

Xi made the remark in a congratulatory message delivered to the "Icebreakers" 2022 Chinese New Year Online Celebration hosted by the 48 Group Club, a London-based nonprofit organization dedicated to promoting trade between China and the UK, on Wednesday. The event was supported by the China Chamber of Commerce in the UK, and the China-Britain Business Council.

In his congratulatory message, Xi recollected the "ice-breaking trip" made by Jack Perry, father of Stephen Perry, chairman of the 48 Group Club, together with a group of farsighted people from the British business community, in spite of lots of obstacles in the early 1950s.

Noting that this year marks the 50th anniversary of the establishment of diplomatic relations at the ambassadorial level between China and the UK, Xi said that looking back, China will never forget old friends who made historic contributions to the development of Sino-British ties.

Looking forward, Xi expressed his hope that farsighted people from China and Britain's industrial and business communities could adhere to the "ice-breaking spirit" to bolster win-win cooperation in order to give fresh significance to bilateral ties and deliver more benefits to the two countries and their peoples.

The 48 Group Club is named after a British trade delegation of 48 businessmen, referred to as the "Icebreakers", who traveled to China in 1954 to establish trading relations between the two countries. The organization's motto is "Equality and Mutual Benefit", and it has been working to promote positive Sino-British relations.

Addressing the event, Zheng Zeguang, the Chinese ambassador to the UK, called for the business communities in China and the UK to join hands and leverage their respective strengths, and consolidate their cooperation in the traditional areas of trade, investment, finance, manufacturing and infrastructure.

He also suggested they should expand into new areas such as healthcare, fintech, green energy, the digital economy and creative industries, and also explore other markets.

"In this way, we can create more highlights of cooperation and bring more benefits to the peoples of the two countries and beyond," Zheng said.

Philip Hammond, former British chancellor of the exchequer, talked about the huge Chinese market, and said that as the UK feels its way to a new set of post-Brexit trade relationships across the globe, China will be an important partner.

Chinese investors can be confident that the things that have made the UK an attractive destination for Chinese investment in the past will continue to do so in the future, he said.