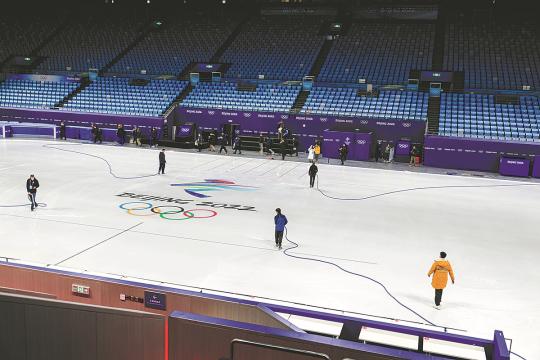 Beijing 2022 venue the Capital Indoor Stadium has installed an eco-friendly ice-making system that uses carbon dioxide as a refrigerant. (PHOTO/XINHUA)

Citing the use of eco-friendly and high-efficient refrigerants at multiple venues, international experts have hailed the ice-making system adopted by Beijing 2022 organizers as a game changer for a sustainable future.

A week out from the first sporting action at the Games, Beijing 2022's ice sports program has already secured a place in history as Chinese organizers, guided by international experts, have implemented carbon dioxide as a green, safe and efficient refrigerant in the cooling systems at five competition and training rinks.

It is the first time a CO2-based refrigerant has been used on this scale at the Winter Olympics.

Traditional refrigeration systems use ozone-depleting Freon, or ammonia, which is toxic. Beijing 2022's CO2-based cooling system is capable of lowering the ground temperature instantly and efficiently, while at the same time having "almost zero" effect on global warming or causing any harm to humans, according to Art Sutherland, an experienced ice-making consultant with the Beijing 2022 organizing committee.

"It's a future-proof refrigerant. In other words, there's no fear that somewhere down the road you're going to remove it," said Sutherland, a Canadian technician who has been involved with refrigeration for every Winter Olympics since the 2002 Games in Salt Lake City, Utah.

"It will be usable and it will be environmentally friendly for the rest of your lives," he added.

"So I'm very impressed and I cannot thank you folks enough to take that initiative toward that direction, and there are a number of other advantages that will be realized on going that way."

Having overseen preparations for all the Games' rinks, Sutherland singles out the National Speed Skating Oval as the one to redefine ice-making at major international events in the future.

As the only newly built Beijing 2022 venue in the city's downtown area, the venue for long-track speed skating, dubbed the "Ice Ribbon" due to its sleek design, is the first in the world to use a CO2 refrigeration system to cool the ground for making a 12,000-square-meter ice surface, the biggest in Asia.

The venue will be used beyond the Games, also hosting sports such as curling and hockey.

The high efficiency of the system-which cuts energy consumption by up to 85 percent-combined with the stable refrigerating effect that keeps the ice temperature even at all corners of the surface, have made the Ice Ribbon the most advanced speed skating venue in the world, reckons Sutherland.

"What I consider the most amazing one of all is the National Speed Skating Oval. They took the initiative and became the first long-track speed skating venue in the world to go with CO2 and eliminate a tremendous amount of global warming potential," he added.

The competition rink at the Capital Indoor Stadium for short-track speed skating and figure skating, as well as three training surfaces for hockey at the Wukesong Ice Sports Center, are also refrigerated by the CO2-based system.

For the rest of Beijing 2022's ice sports venues-namely the National Aquatics Center, aka the Ice Cube, for curling, and the National Indoor Stadium and Wukesong Arena for hockey-venue owners and organizers have upgraded their systems to replace the old refrigerants with the relatively new R449A, an environmentally sustainable, non-ozone-depleting compound.

Although it's not as efficient as CO2 when it comes to reducing carbon emissions, the R449A system also reduces the global warming impact compared to previous refrigerants used at these venues, according to Beijing 2022 organizers.

"It's a huge improvement when you collectively blend them all together. It would have been nice to have them all based on CO2 but you've come a long way here," he said.

"You shall be commended for this important and responsible decision, that will be a very strong asset to support Beijing 2022 sustainability ambitions and commitments as regards Olympic venue infrastructure," Pierre Ducrey, the IOC's Olympic Games operations director, wrote in an email to Beijing 2022 organizers.