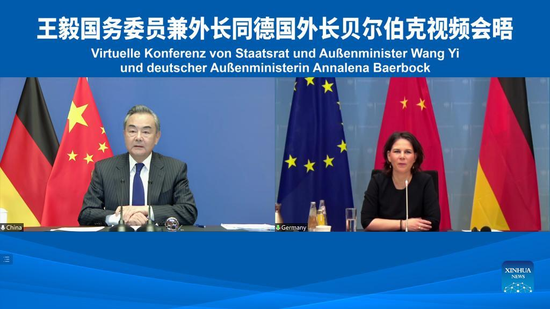 Wang said that China and Germany, as all-round strategic partners, should adhere to being a model of win-win cooperation, leaders in China-EU relations, promoters of a new type of international relations, and collaborators that transcend the differences in social systems.

Last year, the bilateral trade reached a record high despite the impact of the epidemic, which fully demonstrates the complementarity of the two economies and the resilience of economic and trade relations between the two countries, Wang said.

China and Germany should jointly create new highlights of cooperation in the fields of digital technology, communications, service trade, agricultural science and technology, as well as green development, Wang said, adding that China welcomes German companies to expand their investment in China.

Baerbock said the German side is committed to developing a stable partnership with China, and will continue to pursue the one-China policy.

Taking the 50th anniversary of the establishment of diplomatic relations as an opportunity to deepen exchanges and cooperation between the two countries in various fields, Germany is willing to treat foreign companies in Germany, including Chinese companies, equally, Baerbock said.

The two sides agreed to hold proper celebrations for the 50th anniversary of the establishment of diplomatic relations, prepare for the seventh round of intergovernmental consultations and give full play to the role of dialogue mechanisms at all levels.

On the basis of mutual respect, the two sides agreed to conduct equal dialogue on issues such as human rights and democracy, in order to enhance mutual understanding, further strengthen education, non-governmental and local exchanges, and carry out exchanges between more than 100 pairs of sister provinces, states and cities of the two countries through various means. They also agreed to enhance green development cooperation and deepen exchanges on addressing climate change and green governance.

The two sides exchanged views on strengthening cooperation on multilateral affairs and on the Iranian nuclear issue.