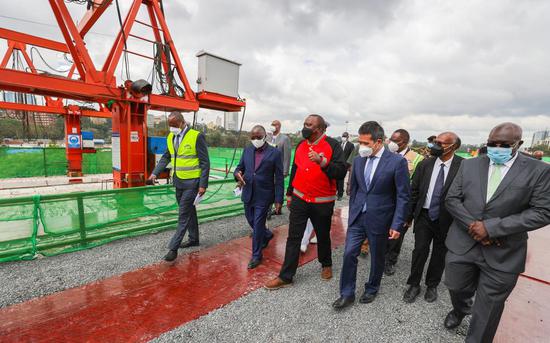 Kenyans will begin using the Chinese-built Nairobi expressway in March, three months earlier than anticipated, an official said on Friday.

Kung'u Ndung'u, the director-general of the Kenya National Highways Authority (KeNHA), said construction works on the road currently stand at 82 percent, bringing it closer to completion.

"Construction of the Nairobi Expressway continues to make good progress with its completion status standing at 82 percent. The project is on schedule for opening to the public by March," said Ndung'u in a notice.

He observed that construction of the operation and monitoring center stands at 99.5 percent while 98.5 percent of elevated sections have been built.

Kenyans are eagerly awaiting the completion of the 27 km road that will cut travel time from the south to west of Nairobi to about 20 minutes from two hours currently during peak time.

Kenyan President Uhuru Kenyatta in December made an extensive inspection tour of the expressway which is financed and constructed by the China Road and Bridge Corporation (CRBC).

Kenyatta hailed the expressway as a key infrastructure project, noting that the highway is bound to reduce the traffic gridlock that people have experienced and that has added to the cost of doing business in the country.

More than 4,000 Kenyan workers in various cadres have been employed by the project with tonnes of construction materials sourced locally, according to KeNHA.