Shenzhen praised for response to COVID-19 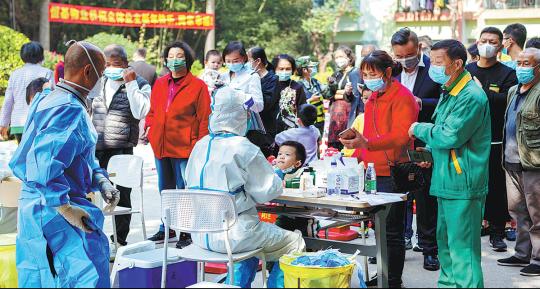 Residents queue up for nucleic acid tests at a community in Shenzhen, Guangdong province, on Jan 7, 2022. （Photo provided to China Daily）

The health commission in Shenzhen, Guangdong province, has been getting praise on Chinese social media over the past few days for its quick response to public needs amid the recent resurgence of the COVID-19 pandemic.

A video posted online by a Shenzhen resident showed three cats that she and her colleagues raised left in a commercial building in the city's Longgang district after the building was shut down on Jan 7 following the reporting of one confirmed case.

As the food and water left for the cats could only sustain them for a few days, the resident - using the name Ailing on the Sina Weibo social media platform - tried to seek help from the building's management company and the residential committee without success.

On Monday, she sent a plea to the Sina Weibo account of the Shenzhen health commission, which soon replied by asking for her phone number.

Hours later, the commission contacted Ailing and sent staff members to the building, providing the cats with sufficient food and water.

There have been other cases reflecting Shenzhen's efforts to respond to public needs in a timely manner during the COVID-19 pandemic.

Last weekend, a resident posted a comment on a WeChat article published by the city's health commission about a pregnant woman who had to wait 12 hours for the results of a nucleic acid test before being hospitalized.

The authorities replied in six minutes and asked for the phone number of the patient.

Related departments streamlined the hospitalization process for pregnant women and solved the problem within two hours.

The health commission's efficiency and responsible attitude to the public request were widely applauded by netizens.

"The commission's reply 'what's your number' is so cool and very impressive! Such a quick response showed the public sectors' concerns about people's lives and needs, which deserves a thumbs-up," said a Sina Weibo user going by the name of Grace Racer.

Affected by the pandemic, some regions of the city were labeled as medium-risk areas and long-distance bus stations were closed temporarily.

Seventy-six were reported in Henan province, 41 in Tianjin, six in Shaanxi province and one in Guangdong, it said.

Many cities have stepped up efforts to respond to public needs during the pandemic.

A post on the Sina Weibo account of the Party publicity department in Zhengzhou, Henan province, on Sunday said that residents who need help with any problems could leave comments or send messages that would be passed on to related departments immediately.