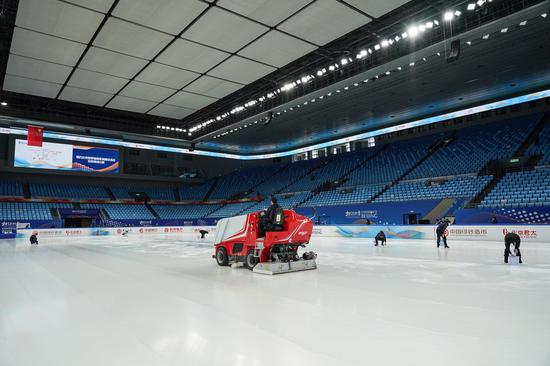 Workers prepare for an upcoming speed skating test event at the Capital Gymnasium in Beijing on April 3, 2021.(Xinhua/Peng Ziyang)

Sustainability has always been a core value in venue construction for the Beijing 2022 Olympic Winter Games, Beijing 2022 organizers noted in a recent interview.

As the world's first "dual Olympic city," except the newly built National Speed Skating Oval and Big Air Shougang, all other venues in Beijing are legacies from the 2008 Olympics. Nine ice rinks in seven venues for Beijing 2022 all adopted environment-friendly refrigerants, while carbon dioxide ice-making technology is used at the National Speed Skating Oval, Capital Gymnasium and Wukesong Sports Center.

According to Liu, snow track construction often involves mountain reformation, during the process of which Chinese builders capitalized their own abilities and did their best to protect the original appearance of the mountain based on the scientific measurements and advice from foreign experts.

Before the construction of the Yanqing competition zone, background investigation and protection of flora and fauna resources were the first to be carried out.

The BOCOG built a Winter Olympic Forest Park over 50 hectares in Zhangshanying Town in the northwest of Yanqing, and experts in forest restoration and transplanting of ancient trees from Beijing Forestry University were hired to conduct thorough investigations of flora and fauna resources of the competition zone and the surrounding area of 2,000 hectares.

Each tree to be transplanted was pictured and collected with QR codes and was then fielded into the traceable and searchable "tree resumes," insuring a 100% transplantation.

"Apart from the emphasis on the environment, the designs of the venues also reflected Chinese wisdom," Liu said.

With less than 30 days to go before the opening of the Beijing Winter Olympics, the work of the Planning and Construction Department has turned to the construction of temporary facilities, such as grandstands, fences, vehicle and human security paths. During the Olympics, the department will focus on the maintenance of facilities to ensure the smooth running of the Games.

Liu stressed that compared to China's huge population, the number of winter sports venues is relatively low. "These venues are not redundant, but they meet a previously unmet daily need of the crowd. From this perspective, I'm still optimistic about the use of these venues after the Games."

At the early stage of construction, the BOCOG had already taken into account the difficulty and the high risk of winter sports and the high threshold for public participation. Public tracks are built next to the Alpine skiing tracks, ensuring a safe experience for ordinary skiers.

Bobsleigh and the luge events are even more difficult to manage, so the entrances for the public were prepared at the end of the track and relatively gentle or less curved places to ensure safety while inviting public participation.

"Encouraging the public to participate in snow sports plays a vital role in driving mass sports activities and promoting the development of the winter sports industry," Liu said.