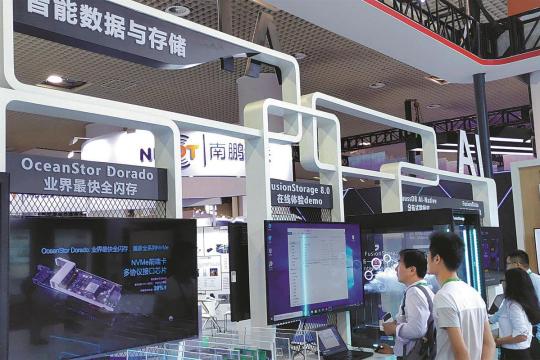 China is at the global forefront in developing the internet of things, leading the way with the construction of IoT infrastructure, and its industrial applications and exploration, a new report said.

The report, released during the 2021 World Internet of Things Convention on Thursday, said China, despite the impact of COVID-19, maintained steady growth in the field last year, especially leaping ahead in terms of the IoT economy.

"China's GDP is expected to expand more than 8 percent to hit over $18 trillion in 2021," said He Xuming, chairman of the WIOTC executive committee. "The output value of internet of things is projected to exceed 2 trillion yuan ($314 billion) in China in 2021."

He told the conference that despite COVID-19, China has built nearly 1.4 million 5G base stations, marking a solid step in the construction of infrastructure for the IoT. Citing the report, He said the 2021 IoT output value is expected to exceed $8 trillion in the world, with about 20 percent year-on-year growth.

The report said more than 600,000 IoT industrial application platforms and life service systems have been developed globally, mainly in fields including industrial and agricultural production and manufacturing, pandemic prevention and control, healthcare, transportation, electricity and energy and environmental protection.

Li Bohu, an academician at the Chinese Academy of Engineering, said that amid a new era of smart IoT, more efforts should be made to build a technological innovation system that brings together enterprises, universities, research institutes and end-users, cultivate more talent, increase policy support, foster the integrated development of technologies, application and industries, and strengthen global exchanges and cooperation.

The 2021 World Internet of Things White Paper was also released during the convention.

"The IoT not only makes traditional industries smarter and more ecological, but also improves the quality of products and makes the supply chain smarter, more accurate and reliable. And this will foster new sources of economic growth in the world, generate hundreds of trillion-dollar markets and create hundreds of millions of jobs."

Countries in Asia, especially China, are leading the world in terms of innovative development and practical applications of IoT, it said.

Going forward, all countries, institutions and enterprises should work together to promote the construction of an IoT world network and global smart economy, it added.

"WIOTC is committed to formulating the international game rules of IoT ... and will protect the interests of the country and privacy of public life, thus realizing world interconnection of all things ultimately," Su said.

"We welcome government organs, scientific institutions, social organizations, and enterprises from all over the world to join the IoT International Convention Organization... with an aim of promoting the global interconnection of all things, powering the innovative development of the world economy and society, and contributing to the building of an intelligent and smart world where all things are interconnected."