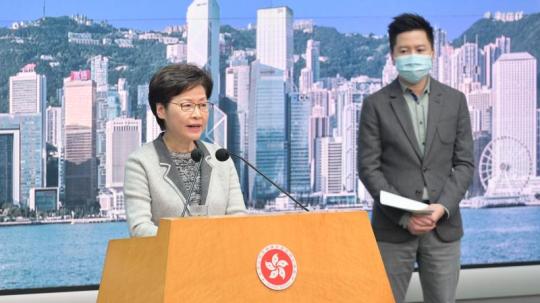 Democracy making progress in SAR under the principle of 'one country, two systems'

The path of democracy in Hong Kong under the guidance of the Communist Party of China and the central government is the right way ahead for the special administrative region's democratic progress, which suits the city's realities and will improve the well-being of its residents, think tanks on Hong Kong studies said on Tuesday.

A seminar on Hong Kong's democratic development under the principle of "one country, two systems" was held in Beijing on Tuesday, jointly organized by the Chinese Association of Hong Kong and Macao Studies, the One Country Two Systems Research Institute, and the Our Hong Kong Foundation.

More than 100 representatives from the mainland and the Hong Kong and Macao special administrative regions attended the meeting. They discussed the central government's principles and position on the HKSAR's democratic progress, the new electoral system and its implementation.

Xu Ze, president of the Chinese Association of Hong Kong and Macao Studies, said since Hong Kong's return to the motherland in 1997, the central government has firmly supported it in developing democracy in accordance with the law and in an orderly manner.

"Facts have fully proved that the Party and the Chinese government are the designer, creator and advancer of Hong Kong's democracy," he said.

Wang Zhenmin, director of the Center for Hong Kong and Macao Studies at Tsinghua University, said the right path of democracy in Hong Kong under the principle of "one country, two systems" must be led by the central government.

Hong Kong should develop democracy and meanwhile ensure security, achieve good governance and improve people's well-being, he said, adding that practice has proved that the Western model of democracy does not work in Hong Kong.

Hong Kong held its seventh Legislative Council election in December, the first such under the revamped electoral system, which ensures Hong Kong is administered by patriots.

He Junzhi, associate dean of the Institute of Guangdong, Hong Kong and Macao Development Studies at Sun Yat-sen University in Guangzhou, said the new electoral system is a beneficial arrangement for the country and the Hong Kong SAR.

It ensures the political security of the country and the SAR and establishes a new mechanism for Hong Kong residents to participate in the management of State and local affairs, he said.

Tam Yiu-chung, a member of the Standing Committee of the National People's Congress from Hong Kong, said the strong vitality and institutional resilience of the "one country, two systems" policy is the fundamental guarantee for Hong Kong's democracy.

"Hong Kong has a bright future since its democratic development got back on track," he added.