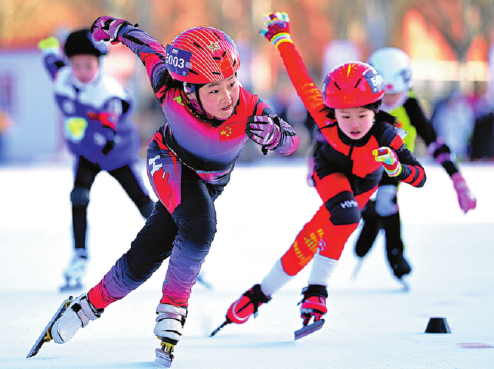 The Beijing 2022 organizing committee is confident its COVID-19 countermeasures will permit safe and on-time Winter Olympics, despite the emergence of the Omicron variant near the capital.

With just over three weeks to go before the 2022 Winter Olympics start on Feb 4, Games organizers are on alert over a cluster of new COVID-19 infections, including Omicron cases in Tianjin, which is 130 kilometers from Beijing. The organizers said they are monitoring the development of the outbreak.

There is no need yet to drastically adjust the pandemic control protocols for the Games, which feature a closed-loop system to keep Olympic participants separated from local communities, the organizing committee said.

"We've been carefully following and analyzing the outbreaks in some parts of the country," Huang Chun, deputy director of the epidemic control office of the organizing committee, said during an online media briefing on Tuesday.

"It's still under control, so we are sticking to all the measures we've put in place, and we are confident that they are sufficient and effective enough to keep everyone safe if the situation does not worsen dramatically."

With international media, broadcast staffers and technical officials arriving in China this month, the closed-loop management system has already been activated at a number of Games venues.

Since Jan 4, the system has been in place at the Main Media Center and the three Games host areas－Beijing's downtown region, the capital's northwest Yanqing district and co-host Zhangjiakou, Hebei province. Games-related personnel can only move between their designated hotels and venues on official transportation services within the sealed loop.

Over 1,500 journalists, photographers and broadcast personnel have entered the loop and begun their pre-Games preparations at the Main Media Center and the mountain media center in Zhangjiakou. This has allowed organizers to conduct valuable trials of health protocols, which can be streamlined for smoother operation during the Games, said the organizing committee's media operations department.

According to the COVID-19 playbook－jointly developed by the committee, the International Olympic Committee and International Paralympic Committee－all Games participants should be fully vaccinated on arrival; otherwise they will be quarantined for 21 days. Vaccinated arrivals who test negative at the airport can enter the loop.

"The experiences of working and living within the loop are getting better, with the operation being perfected," Xu Jicheng, head of the Beijing 2022 media operations, said during a briefing at the media center.

"The feedback from international media who are already here will help us and their counterparts to better adapt to the management leading up to the Games," he said.

The organizing committee also elaborated on the contingency plan for possible threats to the integrity of the closed loop.

People are urged not to directly approach any Olympic vehicles involved in an accident. If a person is injured in a crash involving an Olympic vehicle they should dial the 120 first-aid number immediately and inform the operator it is an Olympic vehicle. A well-trained team will be dispatched from the nearest standby station to handle the accident.

Thirty ambulances, operating within the loop, have been deployed around main Olympic venues in Beijing, and 20 around the venues in Zhangjiakou, Huang said.

"Accident handling will be completed through fast channels to ensure the safety of all people as soon as possible," he said.

The organizing committee's traffic department said it has formulated a thorough plan and rehearsed the process for handling such accidents.