Study based on FAST findings may be historic 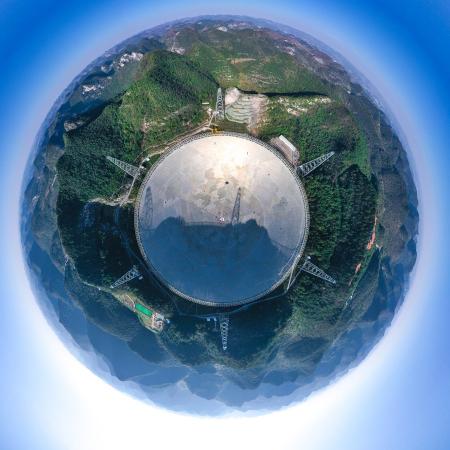 An international team of scientists led by Chinese astronomers has found that magnetic fields cannot hold off gravitational collapse in the early stages of star formation as scientists previously believed, according to a study to be published in the journal Nature on Thursday.

The discovery has challenged the standard theory of star formation, and experts have encouraged international peers to use the newly published observational technique and come up with new theories to explain how stars are born.

The study, which is featured on the cover of Nature, is considered one of the biggest scientific discoveries made by the radio telescope to date.

In the standard theory of star formation, scientists believed pressure created by magnetic fields could influence the formation of stars because they allow interstellar material to resist the force of gravity, thus making it harder for the material to gather enough mass to collapse into a star.

However, studying this interaction has proved to be extremely difficult because such interplay between magnetic fields and matter is notoriously complex and difficult to detect.

Li Di, FAST's chief scientist and the corresponding author of the study, said by taking advantage of the unparalleled sensitivity of the giant telescope, scientists measured the strength of the magnetic fields in the L1544 region, a pre-stellar core in early transition into becoming a star located in the Taurus star forming regions about 450 light years from Earth.

Using an observational technique called HI Narrow Self-Absorption, first conceived by Li and United States astronomer Paul Goldsmith in 2003, scientists discovered that the magnetic pressure was too weak to prevent gravitational contraction at this early stage of the process, a finding that contradicts the standard theory of star formation.

"This discovery has challenged our traditional understanding of the role magnetic fields can play during star formation," Li said. "Our work represents the feasibility and the beginning of using this new technique to study the magnetic fields of the interstellar medium during early phases of star formation."

Richard Crutcher, emeritus professor of astronomy at the University of Illinois, who was not involved in the study, said he was "very impressed "with the talent and engineering behind FAST, which resulted in this groundbreaking discovery.

Crutcher said the discovery was "crucial to understanding the astrophysics of star formation and illustrates the importance of FAST in addressing important unsolved astrophysical problems".

Jiang Peng, chief engineer of FAST, said the telescope recorded 5,308 hours of observation time last year and collected over 11 petabytes of scientific data, making it one of China's most productive major scientific instruments.

Since the telescope's completion in 2016, scientists have published over 120 papers based on data it collected, including four studies in the journal Nature, he said. "FAST has entered a stage of producing high-quality major scientific achievements," he added.

On March 31, FAST was open to research proposals worldwide. Twenty-seven projects from 14 foreign countries have been approved so far and their scientific observation began in August, Jiang said.

Wu Xiangping, a noted astronomer and an academician of the Chinese Academy of Sciences, said that pulsars have been a hot topic in astrophysics given their extreme density, brightness and rotational stability, which allows scientists to measure subtle celestial abnormalities such as gravitational waves.

A major discovery would be a binary system in which a pulsar rotates around a black hole, Wu said. The interaction between these two extreme celestial bodies may enable scientists to test the finer details of Einstein's theory of gravity with unprecedented precision.

"FAST is already exceptionally good at finding pulsars," he said. "But if we can collaborate with other telescopes around the globe, we can detect more pulsars that are fainter and further away from us, and maybe even find ones that are outside of our home galaxy."