Near miss in outer space prompts call for US respect 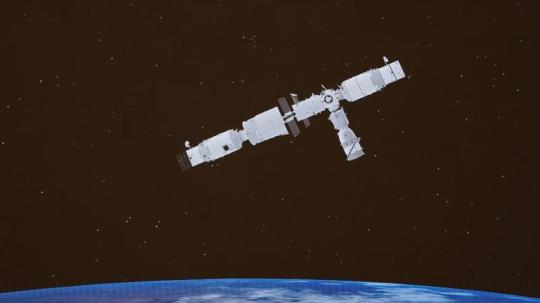 China on Tuesday revealed that its space station has had to avoid two collisions with SpaceX satellites, and called on the United States to respect the international order in outer space and to safeguard the safety of astronauts in orbit.

Foreign Ministry spokesman Zhao Lijian made the remarks while confirming that China's permanent mission to the United Nations had submitted a note verbale to the UN secretary-general for safety reasons earlier this month.

Starlink satellites launched by SpaceX of the U.S. have had two close encounters with the Chinese space station, which constituted dangers to the life and health of astronauts, the note said.

"The Outer Space Treaty that entered into force in 1967 is a universally recognized cornerstone of international law in the field of outer space," Zhao said.

The U.S. talks about the concept of responsible behaviors in outer space, yet in practice it ignores its obligations under the international treaty and has posed severe threats to astronauts, which is a typical double standard, he stressed.

Under the treaty, astronauts are regarded as envoys of mankind and their safety should be respected and protected by all countries, he said.

State parties to the treaty shall immediately inform other states or the secretary-general of the UN of any phenomena they discover in outer space that could constitute a danger to the life or health of astronauts, the treaty says.

It also stipulates that states shall bear international responsibility for national activities in outer space, whether such activities are carried out by government agencies or nongovernment entities.

In order to fulfill the obligation of the treaty and protect astronauts' safety, China notified the UN secretary-general of the dangerous situations as well as the measures China had taken, and asked the secretary-general to circulate relevant information to all state parties to the treaty, Zhao said.

The U.S. should immediately take actions to avoid a reoccurrence of the incidents, Zhao added.