Astronauts in orbit to give space lessons to HK, Macao students 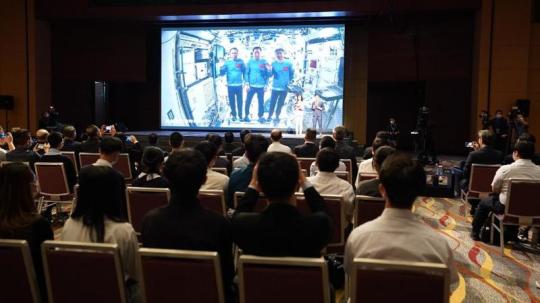 Chinese astronauts on board the Tiangong space station hold a real-time video dialogue with Hong Kong students on Sept 3, 2021. (Photo/Xinhua)

Students from Hong Kong and Macao will be among those who receive lessons from outer space on Thursday, when the country's astronauts now on the nation's orbiting Tiangong space station are scheduled to deliver their first of a series of space lessons.

The lesson will be given by the three astronauts who are currently on the space station — Zhai Zhigang, Wang Yaping and Ye Guangfu. They will demonstrate physical phenomena in microgravity environments, including objects' movements and fluid tension, and perform cytology experiments. The astronauts will also show the working and living environment of the space station.

The lesson will be directly broadcast to the main classroom in Beijing's China Science and Technology Museum and four other classrooms in four places — Hong Kong; Macao; Wenchuan, Sichuan province; and Nanning of the Guangxi Zhuang autonomous region.

Audiences in the five classrooms will be able to submit questions to astronauts during the class. The audience outside the classroom can watch the class through a webcast.

The Hong Kong classroom will be at the Pui Kiu College in Shatin. The college said the space lesson embodies the nation's technology development and it hopes the lesson could further inspire the youngsters' interests in space.

China's first space teaching took place in 2013, which was conducted by Wang. She is also one of the lecturers this time.