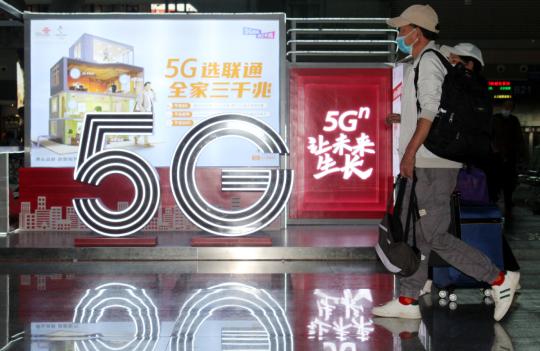 China Unicom, a major Chinese telecom carrier, said on Monday it will step up its push to hone its sprawling 5G network infrastructure and gain an upper hand in the era of the internet of things.

Liu Liehong, chairman of China Unicom, said the Beijing-based company aims to build a sound digital infrastructure for high-quality social and economic development and make the leap from supporting basic telecom connections to enabling smart connections of all things.

China Unicom will give full play to the advantages of communication big data, enhance the integration capabilities of big data, artificial intelligence, and blockchain technologies, and activate the value of data, Liu added at the company's global partners conference which kicked off in Beijing on Monday.

Eager to deepen cooperation in supply chains, China Unicom will join hands with all industrial parties in areas such as smart homes, industrial application of 5G, as well as build an ecosystem for smart terminals to fully open its capabilities, the senior executive said.

The efforts came after China's 5G mobile subscriber accounts reached more than 450 million as of mid-November, taking up over 80 percent of the global total. 5G network coverage has been achieved in urban areas of all prefecture-level cities, 97 percent of counties and 40 percent of rural towns across the country, data from the Ministry of Industry and Information Technology showed.

By the end of October, China Unicom had 143 million 5G mobile subscribers, with 72.68 million subscribing to its 5G data packages this year.

The penetration rate of 5G in China is expected to exceed 30 percent by the end of this year and this will usher in new growth opportunities, said the Global System for Mobile Communications Association, a global telecom industry body known by its acronym, GSMA.

Sihan Bo Chen, the China head of GSMA, said under the background of rapid global 5G deployment, the revenue structure of global operators has changed. In addition to traditional telecommunications sales, revenue from new services has increased significantly. The revenue growth of Chinese telecom operators has been particularly impressive, she said.

As the official telecommunications service provider for the Beijing 2022 Winter Olympics, China Unicom is also working overtime to help make the events into a smart sports gathering enabled by cutting-edge communication technologies.

From self-driving cars and unmanned retailing to digital renminbi, viewers who plan to visit Shougang Industrial Park in Shijingshan district of Beijing for Olympics events will be able to enjoy a smart trip, thanks to the technological support of China Unicom and its partners.