Premier: Nation to open even wider 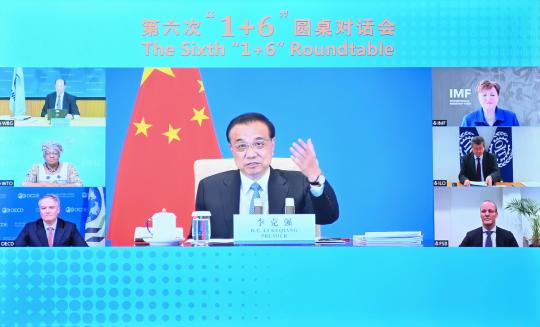 Premier Li Keqiang reiterated on Monday China's commitment to expanding its high-level opening-up and sharing the opportunities brought by the country's development with the rest of the world.

As the Chinese economy has deeply integrated into the world economy, opening-up is China's own choice in pursuing development, he said, adding that China will open even wider.

Li made the remarks at the sixth"1 6" Roundtable in Beijing during a videoconference with the leaders of major international economic institutions.

This year marks the 20th anniversary of China's accession to the World Trade Organization. Li said that over the past two decades, China has strictly observed the WTO's rules, earnestly fulfilled its commitments, and brought benefits to the world while achieving its own development.

Noting that China has played an active role in regional economic cooperation, Li said that China has facilitated the coming into force of the Regional Comprehensive Economic Partnership Agreement early next year.

The RCEP shapes the world's most promising free trade area involving the largest population and biggest scale of trade, and it will add new impetus to regional opening-up and economic recovery, he said.

The premier also highlighted the strong resilience of China's economic development, saying that the nation is confident and also capable of accomplishing the major goals and tasks for this year and sustaining long-term growth.

Now there are more than 150 million market entities in China, with 70 percent of them being active and operating normally. They are the source of confidence for China to cope with difficulties and challenges because they provide a solid foundation for the country to develop its economy, increase employment and improve people's well-being, Li said.

Speaking to the media via video link after the virtual conference, the premier said that China will continue to expand opening-up.

"We will treat all kinds of enterprises on an equal basis and create a good environment for them to invest and prosper," he said.