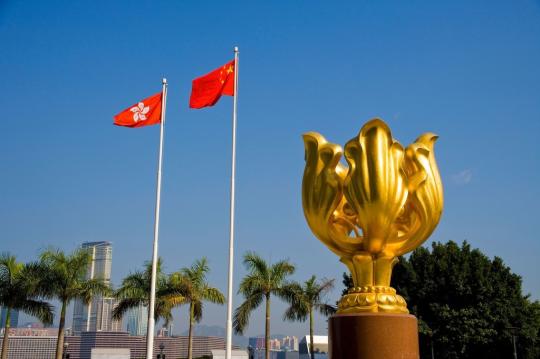 The Hong Kong Special Administrative Region's new electoral system, which aims to fully balance the interests of various sectors and broadly represent their opinions, will open a new chapter in the development of democracy in the city, Xia Baolong, a senior official in charge of Hong Kong affairs, said on Monday.

His remarks came about two weeks ahead of the city's Legislative Council election on Dec 19-the second major election under the city's revamped electoral system.

Addressing an event in the city in a video speech, Xia, director of the Hong Kong and Macao Affairs Office of the State Council, said Hong Kong's new electoral system has many advantages, such as broad representation, political inclusiveness, balanced participation and fair competition.

The speech was delivered during the publication ceremony for a history book chronicling Hong Kong's participation in the nation's reform and opening-up.

Xia said that the backgrounds of the candidates in the upcoming legislative election are "unprecedentedly diverse", adding that the candidates include many grassroots people, such as bus drivers, electricians and tenants of public housing and subdivided units－something rarely seen in previous elections.

He also noted that under the new system, the composition of the Legislative Council has been expanded to include representation of more sectors. Such changes could better help the city to balance the interests of different sectors and regions and help the city solve deep-seated problems accumulated over the years.

He added that the blind pursuit of Western-style democracy has done little to help Hong Kong's democracy development, but only caused crises of social polarization, vicious competition, economic imbalance and ineffective governance, which led to social turbulence such as unrest in 2019 over a later withdrawn extradition bill.

He reiterated that for the successful implementation of "one country, two systems", the city must ensure that Hong Kong is administered by patriots, adding that this in no way means political uniformity, but instead encourages diversity.

The official also warned that external forces should not meddle in the HKSAR's elections, since implementation of electoral systems is purely China's internal affair.

Hong Kong Chief Executive Carrie Lam Cheng Yuet-ngor said that over the past few years, the chaos occurring in the city's legislature brought about by the inability to ensure "patriots administering Hong Kong" was clearly seen.

She said that on the basis of patriotism, candidates of the new-term Legislative Council come from across the political spectrum and are diverse and broadly representative. The government hopes to work together with new lawmakers to lead Hong Kong to usher in a new era of good governance.

Lau Siu-kai, vice-chairman of the Chinese Association of Hong Kong and Macao Studies, said the revamped electoral system enables a wide range of candidates to participate in the election, which will help the government to focus more on solving deep-seated social problems and improve the efficiency of governance.

The new system is in line with the city's actual development needs, which is expected to bring more benefits to Hong Kong, Lau said.

In the Dec 19 election, 153 people will compete for 90 seats, and 4.4 million voters are expected to cast votes at over 600 polling stations.