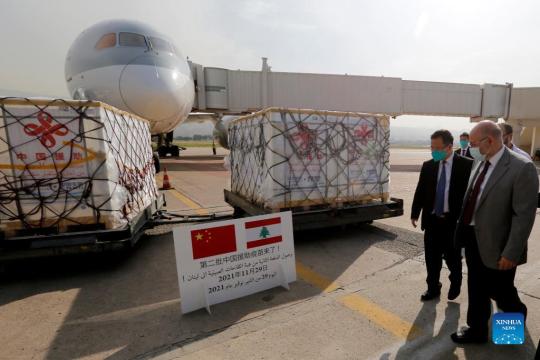 Lebanon on Monday received from China a medical donation consisting of a second batch of China's Sinopharm COVID-19 vaccines, 100 ventilators and 100 hospital beds.

Chinese Ambassador to Lebanon Qian Minjian said that the donation comes on the occasion of the 50th anniversary of diplomatic relations between the two countries.

"We hope that this batch of vaccines and the medical equipment will contribute to Lebanon's efforts in fortifying the line of defense against the pandemic," Qian said during a press conference held at Beirut airport.

Qian explained that China aims to secure an equitable distribution of its vaccines at a low cost, which would turn the Chinese vaccine into a worldwide product with great effects.

For his part, Lebanese Health Minister Firas Abiad said that the donation comes at a very important time as the country is facing an unprecedented financial crisis that has impacted the health sector.

Abiad noted that the vaccines will boost the vaccination campaign amid an increase in COVID-19 cases in Lebanon, while the hospital beds and ventilators will expand the capacity of medical centers to receive more patients if needed.

Lebanon received its first batch of vaccines from China in April and they were administered by the Lebanese army, customs, social security, and different public departments and ministries.