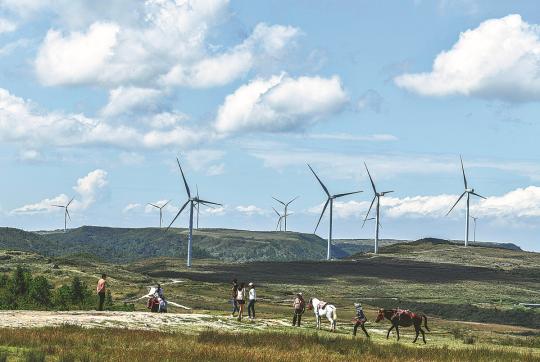 China's installed capacity of grid-connected wind power has reached 300.15 million kilowatts, double that of 2016, and it has been tops worldwide for 12 consecutive years. This is part of the nation's efforts of transitioning to green energy, the National Energy Administration said on Monday.

With its contribution to the country's power supply continuously increasing, wind power currently accounts for 13 percent of the country's total power installation. Generating capacity of wind power accounts for 7.5 percent of total power consumption. The two figures were up 0.3 percentage points and 1.3 percentage points, respectively, compared to 2020, the administration said.

China, which accounts for more than two-thirds of the world's wind turbine output, has been continuously cementing its position as the world's largest wind turbine manufacturer in recent years, it said.

Aiming to peak carbon dioxide emissions by 2030 and achieve carbon neutrality by 2060, China is promoting green and clean energy amid its transition to a low-carbon economy.

An analyst said China has matched its climate change mitigation commitments with a detailed road map and concrete action, with the scale and depth of China's climate measures being unprecedented.

Wind power has become a major player in the country's new energy mix, and it is expected to further expand its share in the days to come, said Luo Zuoxian, head of intelligence and research at the Sinopec Economics and Development Research Institute.

With the scale of wind power in China, both onshore and offshore, continuing to expand, its cost will also gradually decrease, Luo said.

Guo Tao, deputy head of the new and renewable energy department at the NEA, said there has been a development trend toward large-scale wind power turbines, with major breakthroughs having been made.

China has the independent research and development capability to build and operate large-megawatt wind power turbines, and the market share of onshore wind power with a unit capacity of 3 MW has increased significantly, and 7 MW wind turbines have also been released, he said.

The country's wind power industry technological innovation capacity has also been on the rise, and has been capable of manufacturing large megawatt-sized wind turbines, while China is also capable of carrying out independent research, development and manufacturing of the key and core components, with a competitive wind power industrial system on the global stage, it said.

China's installed capacity of renewable energy power generation has reached 1 billion kW by the end of October, which was double the figure at the end of 2015. It accounts for 43.5 percent of the country's total power installation, 10.2 percentage points higher than that in 2015, the administration added.