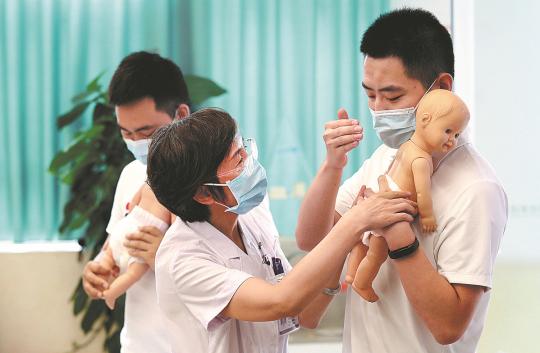 Fathers-to-be learn how to take care of babies at Shijiazhuang Obstetrics and Gynecology Hospital in Hebei province on July 10. The program aims to teach fathers how to share child-raising responsibilities. (Photo: XINHUA/LIANG ZIDONG)

More favorable parental leave policies have been rolled out in Chinese cities and provinces recently in an effort to reduce the burden of childbirth and child care.

More than 10 cities and provinces, including Beijing and Shanghai and Jiangxi and Qinghai provinces, have launched detailed measures, such as longer parental leave, to support couples having more children.

Last week, a revision to the population and family planning regulation was passed in Shanghai. Under the revised regulation, maternity leave will be extended by 30 days to 158 days, and both parents will be entitled to five days of annual paid leave until their child turns three.

Beijing followed suit, and approved a revised regulation last week to extend mothers' maternity leave from 30 days to 60 days, on top of the 98 days leave stipulated in national regulations.

Qinghai and Jiangxi provinces also revised their regulations to help the implementation of the third-child policy.

China has been gradually adjusting its one-child family planning policy. The second-child policy was partially introduced in 2013 and the policy has been practiced nationwide since 2016. In May, the central government announced a new policy encouraging couples to have a third child.

Statistics from the National Health Commission showed that the number of newborns rose to 17.86 million in 2016, the highest number in the past 20 years, but the number slipped to 12 million last year.

According to census figures for last year, China's total fertility rate, the average number of children a woman will have over her lifetime, dropped to 1.3 children. The figure is below the warning line for fertility rates of 1.5, but an improvement from 1.18 in the sixth census released in 2010.

"The fertility rate has become a problem in many countries, not only China, but also developed countries such as the United States and Japan," said Yang Hongshan, deputy dean of Renmin University of China's School of Public Administration and Policy.

Yang said extending maternity leave could not on its own solve the low birthrate problem.

He called for additional favorable housing policies and subsidies for child care. "Only with improved social services, such as education, childbirth protection and medical services, can the burden of having more than one child be fundamentally eased," he said.

"Those support measures are necessary to reduce the fertility burden. But extending parental leave might also lead to other problems, such as higher costs to employers and weakened competitiveness among women in the labor market," said Ren Yuan, from Fudan University's Population Research Institute.

"When the policy is put into practice, we need to have more detailed solutions to prevent it from bringing some negative results to women in the workplace," Ren added.