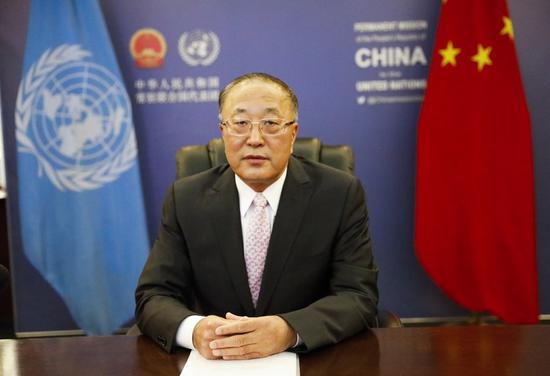 Zhang Jun, China's permanent representative to the UN, speaks via video link at the Third Committee of the 76th session of the United Nations (UN) General Assembly, in New York, Oct. 21, 2021. (China Mission to the UN/Handout via Xinhua)

In accordance with the agreement, the center will mainly focus on promoting international commercial arbitration in the Asia-Pacific region, conducting cooperation with existing arbitration institutions in the Hong Kong Special Administrative Region (HKSAR) of the People's Republic of China and assisting in the enforcement of arbitral awards.

The agreement entered into force on the date of signature on Nov. 11.

At the signing ceremony, Zhang said that Hong Kong is a special administrative region of China, and also an important international financial and trade hub. With the development of China and the implementation of the "One Country, Two Systems" policy, Hong Kong has shown its bright future in development.

The decision by China and AALCO to establish a regional arbitration center in Hong Kong is of great significance, said Zhang.

It will help expand the influence of AALCO, enhance regional cooperation, build Hong Kong into a center for international legal and dispute resolution in the Asia-Pacific region, and promote the HKSAR's development. China is fully confident of the center's promising prospects, Zhang added.

Gastorn, also the permanent representative of Tanzania to the world body, said that the signing of the agreement is a milestone in the history of AALCO and another fine example of AALCO-China cooperation.

The establishment of a regional arbitration center in Hong Kong will inject new impetus into the development of AALCO, and strongly support AALCO's greater role in promoting regional trade, international investment and dispute settlement, he said, adding that AALCO looks forward to further communication and cooperation with China in this regard.

AALCO is an intergovernmental international organization established in 1956 in accordance with the spirit of the Bandung Conference. It aims to promote exchanges and consultations among Asian and African countries on international law issues and reflect their own demands in the development of international law. With 47 member states and two permanent observer states, AALCO is the only platform for international law cooperation across Asia and Africa.