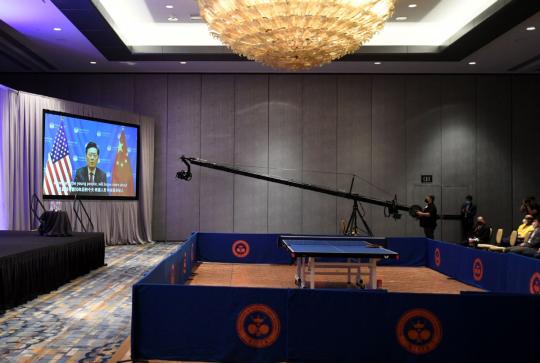 Qin Gang, China's ambassador to the United States, speaks in a video message that is aired in Houston, Texas, at a celebration of the 50th anniversary of Ping-Pong Diplomacy, Nov 23, 2021. （Photo/Xinhua）

Qin Gang, China's ambassador to the United States, said that the story of "a small ball moving the big ball" ushered in the normalization of Sino-U.S. relations in the 1970s and profoundly changed the international political landscape.

"I sincerely hope that in 50 years' time, the two peoples, especially young people, will know more about Ping-Pong Diplomacy and learn from history," Qin said in a pre-recorded video message that was aired on Tuesday in Houston, Texas, at a celebration of the 50th anniversary of Ping-Pong Diplomacy.

Qin noted that although China-U.S. relations have gone through twists and turns and historic achievements have been made over the past 50 years, the ties have encountered serious difficulties in recent years.

"This is not in the fundamental interests of the two countries and peoples, and a better relationship between us is the shared expectation of the two peoples," Qin said.

"Fifty years from the Ping-Pong Diplomacy, the China-U.S. relationship is at a new crossroads," he added. "Today, the big ball of China-U.S. relations still needs the small ping-pong ball to move it forward, from which we see the strategic vision, political courage and people's friendship reflected in Ping-Pong Diplomacy back then, and this is why our commemoration is highly relevant and significant for today."