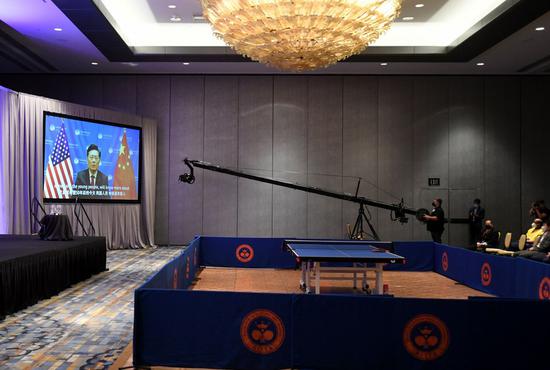 The 50th anniversary of "Ping-Pong Diplomacy" is commemorated in Houston, the United States, Nov. 23, 2021. (Xinhua/Wu Xiaoling)

The 50th anniversary of "Ping-Pong Diplomacy" was commemorated in the U.S. city of Houston on Tuesday evening, highlighting the importance of promoting mutual understanding and friendship between China and the United States through sports.

Named "Celebrating the past for a better future," the event was co-organized by the U.S. National Committee on U.S.-China Relations, the USA Table Tennis and the Chinese Table Tennis Association, with Chinese Ambassador to the United States Qin Gang and former U.S. Secretary of State Henry Kissinger among the key speakers.

Fifty years ago, the story of "a small ball moving the big ball" ushered in the normalization of China-U.S. relations, and profoundly changed the international political landscape, Qin said in a pre-recorded video speech delivered to the event.

The Chinese diplomat also voiced his hope that "the strategic vision, political courage and people's friendship reflected in 'Ping-Pong Diplomacy' back then" could help move forward the big ball of China-U.S. relations.

Fifty years ago, the U.S. table tennis team was invited by its Chinese counterpart to visit China at the conclusion of the 31st World Championships in Nagoya, Japan. The U.S. players landed in Beijing on April 10, 1971, becoming the first U.S. group to visit China since the founding of the People's Republic of China in 1949. The Chinese team paid a return visit the following year.

In his video remarks, Kissinger noted that the exchange of U.S. and Chinese table tennis players about 50 years ago "went off spectacularly well" and "made a great contribution" to promoting bilateral ties, adding that it is important to realize that "even seemingly peripheral events can contribute to international understanding and to peace among two great nations."

Tuesday's event, drawing in more than 150 attendees, also featured a friendly match between table tennis communities from China and the United States.

"In 1971, the American team accepted an invitation to visit the People's Republic of China. International headlines dub table tennis the sport that changed the world," said Susanne Lyons, the president of the United States Olympic and Paralympic Committee.

"The new era in the relations between our two countries send a message of peace that resonated around the globe," Lyons said.