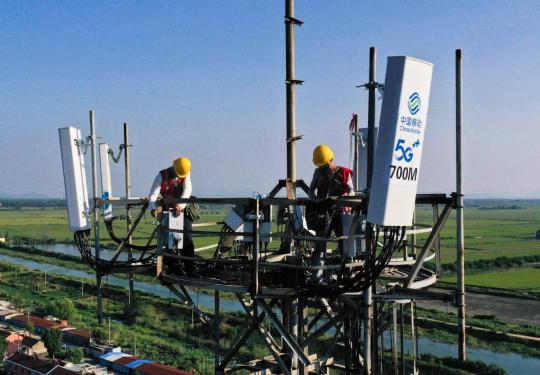 China Mobile employees install and debug the antenna of a 5G base station in Tongling, Anhui province, in September. (GUO SHINING/FOR CHINA DAILY)

The steady rollout of 5G networks will help promote the healthy development of the digital economy, which has become a key force in restructuring the global economy and transforming the global competitive landscape, experts said.

Zhao Dachun, deputy general manager of China Mobile, a major telecom carrier, said 5G is a catalyst to many technologies, including artificial intelligence, the internet of things, cloud computing, big data and other technologies, which can help create a sound infrastructure for the digital economy's development.

China had built more than 1 million 5G base stations as of August, accounting for more than 70 percent of the world's total, according to the Ministry of Industry and Information Technology, the nation's top industry regulator.

Last month, China's top leadership called for more efforts to strengthen and expand China's digital economy through promoting the in-depth integration of digital technologies with the real economy and using such technologies to transform traditional industries and create new industries and business types.

In response, companies are working to promote the use of 5G in more sectors, as industry experts call 2021 the first year that large-scale 5G industry applications have become evident.

Xin Guobin, vice-minister of the MIIT, said 5G applications are in full bloom, with companies scrambling to explore its use in sectors such as culture, sports and entertainment, as well as in industries such as manufacturing, mining and healthcare.

But more efforts are needed to promote the construction of smart cities and communities and to improve informatization levels in transportation, education, scientific research, healthcare, social security and other areas, Xin said.

Lu Yong, senior vice-president of Huawei, said that since the beginning of 2021, more than 5,000 of the company's 5G-to-business projects have been launched in China, several times the sum of such projects launched in 2019 and 2020. 5GtoB is a one-stop solution unveiled by Huawei to promote industrial use of 5G.

Xiang Ligang, director-general of the Information Consumption Alliance, a telecom industry association, said 5G can help elevate the digital economy to a new level of development by empowering more sectors.

5G should inspire industry digitalization, which should not be limited to the vision of individual companies in the industry, but instead should be based on collaborative transformation of multiple partners in the industry, all working with a mindset of "team competition", Xiang said.