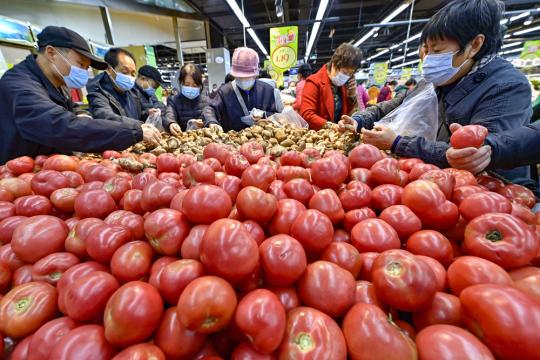 Customers shop in the produce section of a supermarket in Qingzhou, Shandong province, on Nov 11. (WANG JILIN/FOR CHINA DAILY)

China has the confidence and capability to keep prices stable within a reasonable range despite the expected inflationary pressure likely continuing globally, the country's top economic regulator said.

In recent months, prices of vegetables fluctuated periodically in some parts of China due to extreme weather such as heavy rains and low temperatures. Consumer goods prices also jumped due to rising energy and bulk commodity prices, the National Development and Reform Commission said.

"However, compared with the soaring prices in other major economies, China's overall price level is within a controllable range," the NDRC said in a statement posted on its official WeChat account on Sunday.

"China is the 'ballast stone' and 'stabilizer' of global price levels. Looking into the future, inflationary pressure will continue for a period of time across the globe, while China's overall prices will remain in a reasonable range."

China's consumer price index, a gauge of inflation, increased 1.5 percent year-on-year in October, up from 0.7 percent in September, data from the National Bureau of Statistics showed.

"China has ample supplies of key commodities essential for livelihood … And considering the recent pullback in prices of energy like coal and some raw materials, China has the confidence and capabilities to allow the overall price level to maintain stable performance," said Guo Liyan, a researcher at the Academy of Macroeconomic Research of the NDRC.

As of Monday, the average wholesale price for 28 types of vegetables monitored by the Ministry of Agriculture and Rural Affairs was 5.71 yuan (90 cents) per kilogram, down 1.2 percent from Friday.

Referring to the recent rally in coal prices, the government announced a series of measures to cool the market since October, such as boosting output and cracking down on illegal activities like price gouging and market collusion.

The average daily coal supply to key power plants reached 8.1 million metric tons since November, up over 30 percent year-on-year, the NDRC said in a statement posted on Monday.

Coal inventory at power plants across the nation reached 143 million tons as of Saturday, an increase of over 35 million tons from the end of October, enough for 23 days of consumption. The number is expected to exceed 150 million tons by the end of this month, the NDRC added.

Looking into the rest of this year and next, Guo said China has sufficient supply of consumer goods and basic energy, especially key commodities such as grains, oils, meat, eggs, milk, fresh vegetables and fruits, and the overall price levels will continue to stabilize.

The increase in PPI inflation will be temporary as the sharp rise in global commodity prices reverses next year, and the pass-through of recent increases in electricity prices will gradually dissipate, said Louis Kuijs, head of Asia economics at think tank Oxford Economics.

"While we expect further increases in PPI inflation will drive up CPI inflation, we don't believe the latter will become a serious problem for monetary policy," Kuijs said. "We expect CPI inflation to increase from virtually nil year-on-year in the first quarter this year to 2.9 percent year-on-year on average in 2022, with low base effects and higher energy prices playing a key role."