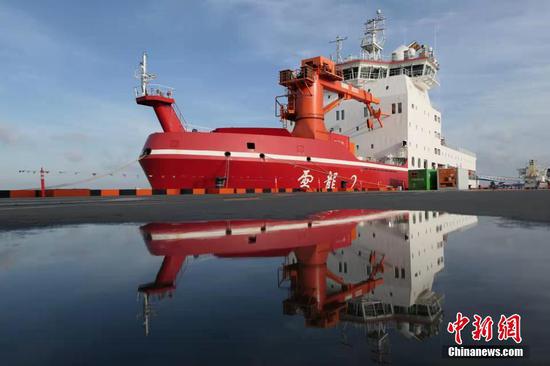 The second batch researchers of the 38th Chinese expedition team set off from Shanghai on Tuesday on Xuelong 2 for the Antarctic. (Photo provided to China News Service by the Ministry of Natural Resources of China)

(ECNS) -- The second batch of 101 researchers of the 38th Chinese expedition team set off from Shanghai on Tuesday on Xuelong 2 for the Antarctic, according to the Ministry of Natural Resources of China.

This is the third time Xuelong 2 has participated in China's Antarctic expedition.

Focusing on global climate change, the 38th mission will carry out scientific surveys including atmospheric, hydrological, meteorological and environmental investigations and monitor new pollutants like microplastics and drifting garbage in Antarctic Ocean.

It will also send supplies and rotational staff to China's Zhongshan and Great Wall stations.

The first batch of 154 researchers left for the South Pole on Nov. 5 from Shanghai and arrived at the supply station Monday.

The 38th expedition team will return to China in mid-April next year as planned.