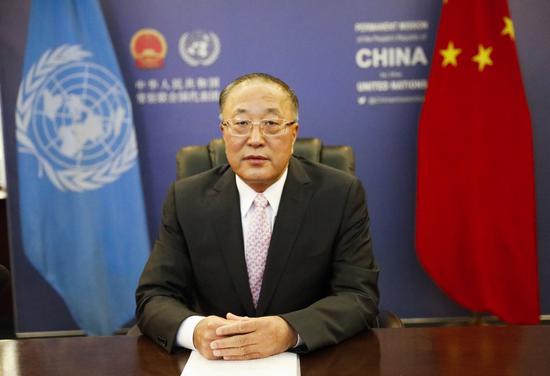 A Chinese ambassador on Tuesday urged the international community to deepen understanding of preventive diplomacy as the world is undergoing complex and profound changes.

"Taking appropriate actions in the early stages of a crisis can have a multiplier effect. The key is to form a systematic, scientific and effective preventive diplomacy strategy," he said.

The international community should "take full use of mediation methods, strengthen the early warning mechanism and support the UN secretary-general to play a unique role", said Zhang, adding that early warning can prevent problems from emerging and also avert overreaction and improper intervention.

The envoy pointed out that the international community must focus on solving the root causes. "Only by eliminating the root causes of conflicts can lasting peace and stability be achieved. We must support countries in conflicts to improve their governance systems, improve their governance capabilities, adhere to the people-centered approach, seek development, and explore development paths that suit their own national conditions," said Zhang.

Zhang said that the international community must take concrete actions to support relevant countries in fighting poverty and hunger, and increase investment in education, health, infrastructure and other public services. "These are important means to strengthen national identity and promote social unity," he said.

The international society must "respect the leadership of the parties", Zhang said. Preventive diplomacy "must adhere to the purposes and principles of the United Nations Charter and follow the basic norms of international relations such as sovereign equality and non-interference in internal affairs", he said.

Zhang emphasized that a successful preventive diplomacy plan must be based on specific circumstances, led by the parties, and there is no uniform application template.

He pointed out that the UN General Assembly is an important platform for dialogue and cooperation among UN member states to build consensus. The Economic and Social Council has professional advantages in promoting economic development and promoting peace and stability.

The International Court of Justice is the main judicial organ of the UN, dedicating to promoting the international rule of law and the peaceful settlement of disputes, while the UN Secretariat plays an important role in strengthening coordination within the UN system.

"These agencies should carry out their work in accordance with their respective powers, while maintaining communication and cooperation," said Zhang.

"China supports the Peacebuilding Commission to strengthen its interaction with the Security Council in light of its own mandate, so as to play a greater role in conflict prevention. The Security Council should further strengthen cooperation with regional organizations such as the African Union and focus on giving full play to their unique advantages in preventing and resolving conflicts in the region," the envoy suggested.

Zhang pointed out that China looks forward to in-depth discussions with member states, strengthening cooperation, clarifying follow-up thinking, and striving to gradually transform the vision put forward in the report into reality, so as to build a peaceful and secure world with a common future.

According to the Department of Political and Peacebuilding Affairs of the UN, preventive diplomacy refers to diplomatic action taken to prevent disputes from escalating into conflicts and limiting the spread of conflicts when they occur. It also encompasses the involvement of the Security Council, the secretary-general and other actors to discourage the resorting to violence at critical moments.