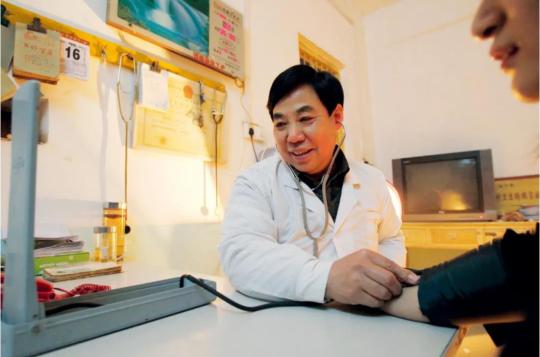 Barefoot doctors were healthcare workers trained to attend the basic medical needs of China's vast rural population from the 1960s to 1980s.

"Back in the 1950s and 1960s, there was no doctor in our village," Ma, who is from Liuzhuang village in Tongxu county of Central China's Henan province, was quoted as saying by China Newsweek.

For the villagers with minor ailments, it was common for them to carry on and wait for the diseases to recede, according to Ma. For those with severe conditions, the well-off ones could go to see doctors at urban hospitals and the poor could only wait for death.

Ma's mother died of typhoid at the age 32. His 8-year-old younger brother also succumbed to the disease in less than two months.

Having witnessed his beloved ones die in succession, Ma made up his mind to become a doctor.

The country was then beset with acute shortage of trained doctors and medicines. And health workers were disproportionately concentrated in urban areas.

After the founding of the People's Republic of China in 1949, the nation started exploring a rural healthcare system suitable for its conditions. On top of building clinics in the countryside, the health authorities also sent mobile medical teams from urban hospitals to bring health services to rural residents.

For quite a long period of time, however, these medical visits were organized on an irregular basis, and there was no systematic healthcare network in the vast rural areas.

In 1965, Chairman Mao Zedong, who was unhappy about the disparity in healthcare services between urban and rural areas, ordered the health authorities to "shift the focus of medical and health work to the countryside" and "cultivate a large group of physicians affordable to rural areas to serve the peasants."

In 1965, a pilot program to cultivate rural health workers was launched in Jiangzhen Commune of Shanghai. Commune was the highest of the three administrative levels of China's rural areas from late 1950s to early 1980s. The 4-month-long training course produced the country's first batch of "barefoot doctors", a name derived from the fact that these health workers also worked in the fields in addition to treating illnesses.

The pattern quickly spread nationwide. By the end of 1975, the country's "barefoot doctors" numbered more than 1.5 million.

After graduating from a junior middle school in 1967, Ma Wenfang went to receive medical training as a "barefoot doctor". He learned both Western medicine, including anatomy and physiology, as well as traditional Chinese medicine such as the use of medicinal herbs and acupuncture.

During the era of the People's Commune, rural residents earned work points, instead of cash payment, a measurement of how much they contributed to the production brigade – the administrative level lower than the commune – they belonged to.

Ma said barefoot doctors could earn more work points than ordinary villagers. They sometimes could garner 10 points, the maximum for a day's work. And at the end of a month, they received food from the production brigade based on the work points they secured.

A cooperative medical system was adopted in rural areas at the time, in which individuals paid a small sum. In Ma's case, it was 0.1 yuan (1.5 cents) every month. The rest of the medical bills were covered by the village collective economy.

However, with only rudimentary medical knowledge, barefoot doctors could provide no more than basic healthcare services.

Ma said barefoot doctors mainly dealt with slight and common illnesses such as cold and heatstroke, whereas patients with severe diseases such as acute appendicitis had to be transferred to bigger hospitals for treatment.

By the mid-1960s, after continuous practices and training, the country's rural health workers were able to cure scores of common diseases, and practiced acupuncture and dozens of herbal medicine.

Since most farmers could not afford Western medicines, they mainly relied on self-cultivated herbal medicines to heal diseases. Ma also ground herbs into powders and made pills himself.

The wide use of herbal medicines, which were affordable and accessible to rural residents, helped mitigate the financial burden on patients.

Ma won the trust of patients through his devotion and hard work.

In the 1960s, malaria was rampant in rural areas and villagers had little knowledge about disease prevention. Ma visited his village's 360-odd households one by one to educate them about malaria. If someone was not at home, Ma would go to the fields to look for him or her.

When he met villagers who refused to take the anti-malaria drug, Ma would persuade them into accepting it, and saw to it that they took the drugs on site.

A course of anti-malaria drug treatment lasted for a week, and the whole process continued for two years until the infectious disease was eliminated in the village.

Ma recalled that the rural roads were rugged at the time, and without bicycle, he had to walk to the homes of patients. One day, when he was out seeing a patient, his wife went into labor. He barely made it home to help deliver the baby. Until today, Ma still feels guilty to his family for his absence during such critical moments.

In fact, barefoot doctors were also responsible for all hygiene-related work such as ensuring sanitation of drinking water, proper disposal of human feces, and pest control.

"The barefoot doctors, most of whom were poor farmers, were filled with enthusiasm in serving farmers who belonged to the same category of class as them, and thus worked selflessly and tirelessly," said Yang Nianqun, a history professor at the Renmin University of China.

"The barefoot doctors and the rural cooperative medical system were products in the context of scarce medical resources and severe uneven distribution of them," said Li Decheng, a professor at Jiangxi Normal University.

Yang said the system of barefoot doctors also contributed to the implementation of the government's health campaigns, such as massive vaccination and distribution of anti-epidemic medication.

As the system of People's Commune collapsed, the rural cooperative medical system and barefoot doctors lost their institutional and economic support.

The appellation "barefoot doctor" was officially abolished in 1985, and many such doctors retired, changed their profession, or started private clinics. Some others contracted the clinics from the communes and turned self-sustaining practitioners, though still under the name of "barefoot doctors".

These "barefoot doctors" have improved their professional skills through training and self-learning, and were still well-received among villagers in the following years.

In the 1990s, Ma said he saw more than 150 patients a day at the busiest time. In the "golden era", Ma's clinic was able to keep some profits. After setting aside a portion of revenues for family spending, Ma used the rest to treat villagers and vaccinate children who came from poor families.

But by the mid 1990s, the coastal areas in East China saw an economic take-off, attracting rural labor force to seek higher payments. The village clinics, plagued by outdated facilities and shortage of fresh hands, lost their appeal to patients, who were increasingly inclined to go to large hospitals.

"The collapse of the cooperative healthcare system and the changed roles of 'barefoot doctors' undermined the rural primary health system," said Zhang Daqing, a medical history expert of the School of Medicine at Peking University.

In 2003, the Chinese government proposed to build a new rural cooperative medical system in a bid to reestablish a rural health safety net.

"The current problem in the rural grassroots medical system can't be solved by returning to the old system of barefoot doctors," said Zhang Daqing.

He said as people's livelihoods improve, it is natural for them to aspire for better medical services. The government could devise a tiered medical system and channel more quality health resources to rural areas.

Since 2008, Ma visited more than 300 villages in seven provinces including Henan, Shandong and Hunan. He found more and more villages had hollowed out, with rural health workers living on meager salaries. In some villages, there were no rural doctors at all.