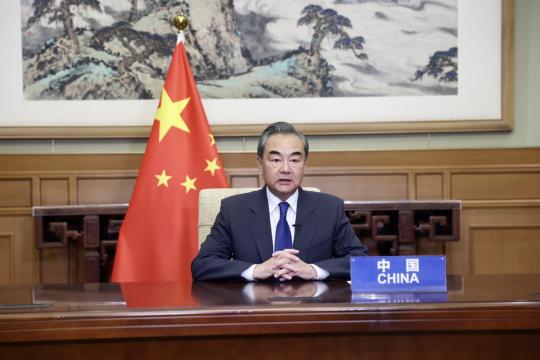 State Councilor and Foreign Minister Wang Yi expressed opposition on Tuesday to making the seas a tool for seeking unilateral hegemony, and he called for nations to jointly safeguard maritime order.

Oceans and continents are in a harmonious and symbiotic relationship, not a zero-sum game of competition for sea power and land power, Wang said when addressing via video link a symposium on global maritime cooperation and ocean governance.

"We oppose certain countries flexing their muscles, forming cliques and repeatedly infringing on the legitimate rights and interests of other countries in order to maintain maritime hegemony," Wang said.

Global maritime governance faces various challenges such as constantly emerging security issues and the worsening environment, which need to be addressed through global solidarity and cooperation, Wang said.

He said that the recent problems in the global supply chain were not only caused by COVID-19 but also by unilateralism and protectionism.

Wang called for countries to jointly promote free trade to maintain the stable and smooth operation of maritime transport and industrial chains and build an open global economy.

Instead of being divided into separate islands or camps, mankind should be brought closer together by the oceans, and build a maritime community with a shared future, he said.

The state councilor said that China always respects the reasonable maritime interests of all parties, overcomes differences with dialogue and resolves disputes through negotiation.

Wang also called on countries to strictly deal with acts that damage the marine environment, such as discharges of nuclear sewage, in accordance with the law to protect the oceans and promote green development.

China is willing to deepen cooperation with other countries, including on prevention and control of marine environmental pollution and the orderly development and utilization of marine resources, he said.