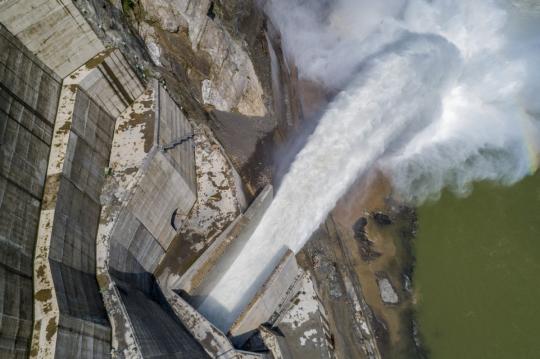 Clean energy accounts for about 96 percent of the total output of Three Gorges Corp, representing another step toward its goal of building a world-class clean energy group while contributing to the country's energy security amid a power crunch in some parts of the nation, the company said.

The fifth megawatt unit of the company's Baihetan Hydropower Station, second only to the world's largest Three Gorges Dam project, was put into operation on Monday, adding green momentum to the power supply for this winter and the upcoming spring.

With nearly one-third of units already put into operation, the Baihetan Hydropower Station, which straddles the southwestern provinces of Yunnan and Sichuan, now boasts a total installed capacity of 16 million kilowatts.

All units will likely be operational by July 2022, when power generation will meet the annual electricity consumption needs of 500,000 people.

Meanwhile, China's first million-kilowatt offshore wind farm located in the South China Sea reached a production capacity of 440,000 kilowatts. The farm is part of a project whose total installed capacity is 1.7 million kilowatts. The project can provide 4.7 billion kilowatt-hours of electricity each year, meeting the annual electricity consumption of around 2 million middle-income households.

Luo Zuoxian, head of intelligence and research at the Sinopec Economics and Development Research Institute, said hydropower is more stable compared with other renewable energy and will play a key role in the new power system in the future.

"The government plans to build new large hydroelectric dams, especially in the southwestern regions as rivers located in this area are ideal to harvest hydropower, and the construction of Baihetan hydropower station is part of the plan," he said.

"The operation of the station will further facilitate making the southwestern parts a key renewable energy center with hydropower as a key player."

The cluster will have an installed capacity of 46.46 million kilowatts, which is equivalent to twice the output of the Three Gorges Dam in the middle reaches of the Yangtze, and will generate about 190 billion kWh annually.