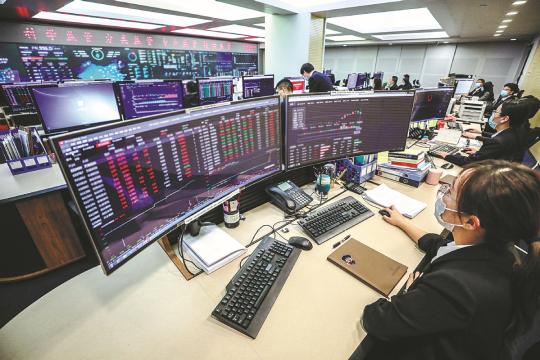 Staff members are busy at work at the Beijing Stock Exchange on Sept 14. The new bourse, registered on Sept 3, aims to nurture an array of specialized and innovative small and medium-sized enterprises. (Photo by Dai Bing/for China Daily)

While high hopes exist for the planned Beijing Stock Exchange as it is expected to further facilitate the innovation of small and medium-sized enterprises, the new bourse should differentiate itself from the existing STAR Market in Shanghai and ChiNext in Shenzhen, Guangdong province, market experts said.

During the Global Trade in Services Summit of the 2021 China International Fair for Trade in Services held on Sept 2, President Xi Jinping said in a video speech that China will set up a stock exchange in Beijing.

The NEEQ Select, the highest tier of the National Equities Exchange and Quotations, will be upgraded to cover the Beijing Stock Exchange. Qualified companies traded on the NEEQ Innovation, the second-highest tier at NEEQ, can apply to list on the Beijing bourse as long as they stay listed on NEEQ Innovation for 12 consecutive months, the draft stock listing rules released on Sept 5 said.

The launch of the Beijing Stock Exchange, with its focus on innovative SMEs, will strengthen the positioning of the two existing bourses in Shanghai and Shenzhen, said Victoria Mio, director for Asian equities at Fidelity International.

The three exchanges will complement each other to facilitate the capital funding initiatives among companies, especially SMEs, the latter of which are of great importance to the country's economic development, she said.

Xiao Yaqing, minister of industry and information technology, said during the two sessions in March that over 95 percent of the country's registered enterprises are SMEs, making great contributions in terms of providing job opportunities and boosting economic growth.

As stable growth and employment remain the focal points of the government while it is seeking to achieve common prosperity, support for SMEs will be crucial, said Mio.

It will join forces with the Shanghai and Shenzhen exchanges in terms of regional equity markets and better bridge the northern and southern markets. A sound cycle among finance, technology and industries will be formed to advance China's high-quality economic development, he said.

Together with the STAR Market on the Shanghai bourse and ChiNext in Shenzhen, the Beijing Stock Exchange will better serve the real economy by fulfilling their respective responsibilities, said Dong Zhongyun, chief economist of AVIC Securities.

The STAR Market will mainly serve the technology innovation companies which aim to serve the country's key strategies and make key technological breakthroughs. By focusing on hard technologies, these companies should be highly recognized by the market, said Dong.

ChiNext-listed companies will focus on the integration between traditional industries and new technologies, industries and business models. Based on the NEEQ Select, the Beijing bourse will mainly serve innovative SMEs. The three boards will each have their specialties and complement each other to ensure the structural equilibrium of the Chinese capital market, added Dong.

The companies can be interpreted as having more room for development, but they also face more uncertainties. In this sense, investment in Beijing bourse-listed companies may bear a lot of resemblance to venture capital endeavors.

"The Beijing exchange will help to build a multilevel capital market. A complete chain comprised of the Beijing bourse, STAR Market and ChiNext, as well as the A-share main board, will be established. There will also be consistency reached in terms of facilitating trading and financing," Jiang said.