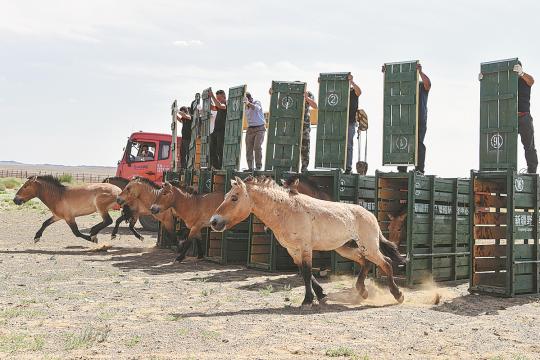 Employees release artificially bred Przewalski's horses, an endangered species, into the wild at the Kalamaili Nature Reserve in the Xinjiang Uygur autonomous region, one of the original habitats of the species, on Sept 1. (Photo by DING LEI/XINHUA)

China published its first white paper on biodiversity conservation on Friday to share the nation's achievements and experience with the globe.

Zhao Yingmin, vice-minister of ecology and environment, told a news conference held by the State Council Information Office that the white paper will build confidence in boosting the global response to address biodiversity risks.

It also aims to promote a good outcome at the upcoming COP 15, the 15th meeting of the Conference of the Parties to the Convention on Biological Diversity, to be held in Kunming, Yunnan province, from Monday to Friday, Zhao said.

He called for more efforts among the parties, including making viable goals and securing funds, techniques and talents especially for developing countries.

He added that international cooperation is needed to strengthen the sector and China would like to share its practices and ideas in biodiversity conservation through the white paper.

In 1993, the United Nations' Convention on Biological Diversity entered into force. As one of the first participating parties, China has achieved remarkable results.

Since China set up its first nature reserve in 1956, the country has safeguarded 71 percent of its wild animal and plant species under State-level protection and 90 percent of its terrestrial ecosystem types including forests, grasslands, deserts and wetlands, the white paper said.

Over the past 40 years, the nation's population of wild giant pandas has increased from 1,114 to 1,864. The number of crested ibis in China has grown from seven at its discovery to more than 5,000－including those in the wild and artificially bred ones, the white paper said.

Meanwhile, 112 species of rare and endangered plants unique to China have returned to the wild, the white paper said.

The increasing numbers were due to the expanding space of habitats, the white paper said.

China has established about 10,000 nature reserves, accounting for about 18 percent of its land area.

The country also carried out endangered species rescue projects to expand their population through artificial breeding and then releasing them into the wild. For example, giant pandas have integrated themselves well in the wild, the white paper said.

One of China's innovative models is to draw red lines in protection areas, which the United Nations included as one of its 15 classic cases. Protection in areas within red lines is rigorously enforced.

"China will provide assistance to other developing economies and contribute the nation's plans and power to the harmonious coexistence of man and nature," Zhao said.

The white paper said that China has cooperated with many countries to establish cross-border nature reserves.

For example, wild species continue to increase in the Sino-Russian protected area and Siberian tigers were spotted roaming freely in the area.