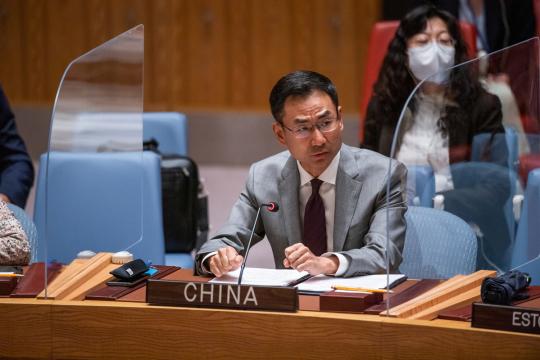 A Chinese envoy presented a joint statement by the foreign ministers of China and Russia at the United Nations Thursday, which underscored the importance of strengthening the Biological Weapons Convention (BWC).

Since its entry into force in 1975, the BWC has played an important role in eliminating the threat and proliferation of biological weapons, as well as promoting the peaceful use of biological technologies, Geng Shuang, China's deputy permanent representative to the UN, told the general debate of General Assembly's First Committee.

Noting that the BWC's ninth review conference is scheduled for next year, Geng said it's important for the international community to take the opportunity to "strengthen the authority and effectiveness of the convention, and promote the early realization of the complete elimination of biological weapons".

The BWC is a multilateral disarmament treaty that bans the development, production, stockpiling, transfer or acquisition of biological and toxin weapons. As of October 2021, 183 countries are parties to the treaty.

"The BWC is essential as a pillar of international peace and security, and should be fully complied with and further strengthened, including through its institutionalization and the adoption of a legally binding protocol to the convention with effective verification mechanisms," Geng said.

The two countries call on the BWC state parties to develop operating standards, technical guidelines and procedures, and improve the mechanism for investigating incidents of the use of biological weapons, he added.

Russia and China note with concern that due to the unilateral withdrawal of the US from the process in 2001, the BWC state parties have failed to resume the multilateral negotiations on the protocol to the convention over the past two decades, despite the wishes of the overwhelming majority, the envoy said.

"The United States' and its allies' overseas military biological activities (over 200 US biological laboratories are deployed outside its national territory, which function in an opaque and nontransparent manner) cause serious concerns and questions among the international community over compliance with the BWC," Geng said.

The two countries share the view that such activities pose serious risks to the national security of China and Russia and are detrimental to the security of relevant regions, he said.

The two nations urge the US and its allies "to act in an open, transparent and responsible manner, by informing properly on its military biological activities carried out overseas and on their national territory," Geng said.

China and Russia believe that the inclusion of information on the overseas military biological activities in the reporting form by the BWC state parties will help "fill in the blank spots" in the mechanism and foster confidence among the state parties, he said.

The two countries urged the BWC state parties to pay greater attention to the rapid development of science and technology and promote the full use of the latest advances in biotechnology for peaceful purposes.

They also call on the BWC state parties to take a constructive approach to ensure that the decisions taken at the ninth review conference next year will help strengthen the BWC.

China and Russia requested that the joint statement be distributed as a UN General Assembly document, Geng said.

"The two countries stand ready to work with the international community to promote true multilateralism, strengthen the authority and effectiveness of the BWC, safeguard multilateral arms control and disarmament regime, and maintain international peace and security," he added.