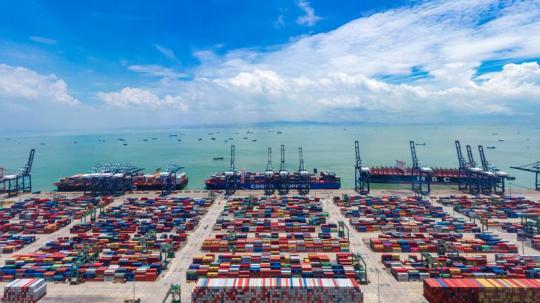 This undated photo shows the Port of Guangzhou, which has 137 international container line routes, including 114 to countries and regions involved in the Belt and Road Initiative. (PHOTO PROVIDED TO CHINA DAILY)

Ports in the Guangdong-Hong Kong-Macao Greater Bay Area saw a speedy recovery in cargo handling in the first half of 2021, with some achieving a surge over 36 percent.

Due to the pandemic and subsequent lockdowns, global cargo shipping slumped in 2020. But ports in the Greater Bay Area are now recovering faster than many of the world's major shipping hubs like Singapore and Shanghai.

As once the world's busiest port terminal and now the ninth, Hong Kong can expect to benefit from the strong comeback of these Chinese mainland ports in the 11-city cluster.