Booster shot plans being drawn up 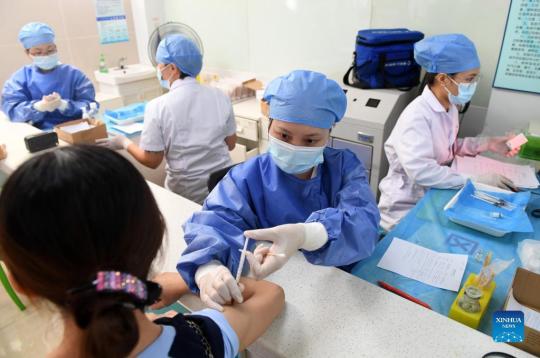 A medical worker administers a dose of COVID-19 vaccine to a citizen at a community health center in Qingxiu district of Nanning, South China's Guangxi Zhuang autonomous region, Aug 27, 2021. (Photo/Xinhua)

China is accelerating the formulation of policies and implementation guidelines for COVID-19 vaccine booster shots for key groups of people as the risk of infection from imported novel coronavirus variants remains high, a health official said on Wednesday.

Cui Gang, an official at the National Health Commission, said the commission will guide local governments to give booster shots first to people who have been fully vaccinated for six months and work in high-risk areas including airports, ports, border checkpoints and hospitals, as well as people over the age of 60.

Wang Huaqing, chief expert on immunization planning at the Chinese Center for Disease Control and Prevention, said that based on domestic and foreign research results, COVID-19 vaccines have played a major role in preventing infections and alleviating symptoms.

However, the efficacy of vaccines is undermined after some time. Based on research, booster shots have not resulted in serious side effects, but can quickly increase the amount of neutralizing antibodies, he said.

Moreover, even though antibody levels decreased six months after a booster shot was administered, they were still higher than the peak level after the first and second doses of vaccine, Wang said.

Hou Zhengang, an official at the Ministry of Culture and Tourism, said the number of travelers during the weeklong National Day holiday beginning on Friday is expected to rise because people are eager to travel and the weather is expected to be pleasant.

Scenic spots should continue to limit visitor numbers and require advanced bookings, while tourists should have their health codes and temperatures checked, he said.

If any provincial-level regions report medium- or high-risk areas for COVID-19 infections, cross-provincial group tours to that region should be halted immediately, he said.

The Ministry of Transport has strengthened inspection and guidance to carry out epidemic control work during the holiday, said Han Jinghua, deputy director of the ministry's transport service department.

The ministry asked transport service providers to implement disinfection in places such as bus stations, service areas and toll booths and on public transport, he said.

The latest COVID-19 outbreak in Fujian province has been effectively brought under control, said Mi Feng, a spokesman for the National Health Commission. Efforts should be made to consolidate the epidemic prevention and control achievements to prevent a resurgence, he said.

Mi warned, however, that the epidemic situation in Heilongjiang province is still at a critical stage. He called for continued efforts to contain the spread of the virus in the region.