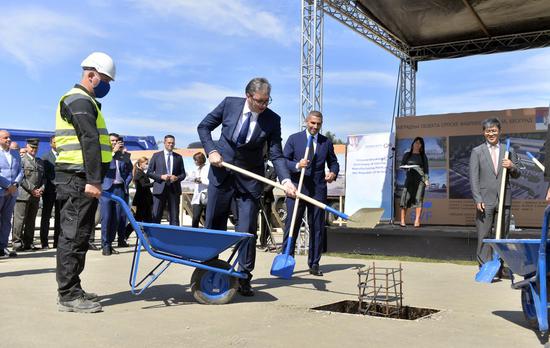 Construction of the first Chinese vaccine factory in Europe began in Belgrade on Thursday, amid the fourth wave of the COVID-19 pandemic that ravages Serbia and its neighboring countries.

The new facility is expected to produce 30 million COVID-19 vaccine doses annually starting from April 2022, and to supply Serbia and several other countries in the region with the Chinese-developed Sinopharm vaccines.

Serbia, as well as the whole region of the Western Balkans, is bracing for the fourth wave of the COVID-19 epidemic, marked by rising numbers of daily infections and patients who need medical care.

On Monday, Serbia reported 6,249 new infections after testing 21,163 people -- the highest daily increase since the winter of 2020. Almost all the new infections were caused by the Delta variant.

Meanwhile, more than 3,000 people were hospitalized, of whom 142 were on ventilators.

Serbia has registered more than 823,000 infections and 7,575 deaths since reporting the first case in the country on March 6, 2020, according to its Institute of Public Health.

Although Serbia started mass vaccination in as early as January, just over 50 percent of adults have been vaccinated so far due to decreasing interest among the people. Official data shows that between 5,000 and 10,000 people have recently been applying for vaccination per day.