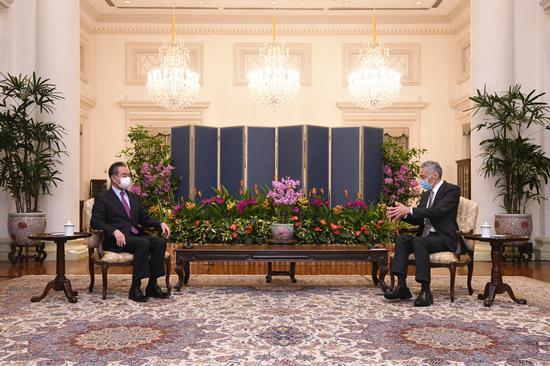 During the talks, Wang said that the development of China-Singapore relations has maintained momentum over the past 30 years thanks to the strategic leadership of both sides, the concerted efforts of all walks of life in the two countries, and Singapore's rational and objective perspective towards China's growth and its ability to find cooperative opportunities from the growth to achieve mutual success.

Lee Hsien Loong agreed that Singapore and China have witnessed fruitful exchanges and cooperation in various fields since the establishment of the diplomatic relations between the two countries, which Singapore cherishes dearly.

He also expressed hope for a greater achievement in this regard in the future.

Wang said that China is willing to join hands with Singapore to strengthen mutual trust and deepen exchanges in the post-pandemic era, so as to further enhance mutually beneficial cooperation in various fields, and contribute to regional and global peace, stability and development.

Lee said that China has achieved great success over the past four decades, and consequently its international responsibilities have risen as well.

Singapore hopes that all parties will have positive interactions with China, and work with China to jointly build a global village in the era of globalization, so as to promote the world's long-term and sustainable development.

Touching upon China-ASEAN relationship, Wang noted that China would continue to consolidate ties with the Association of Southeast Asian Nations (ASEAN) countries, speed up the consultations on the Code of Conduct (COC) in the South China Sea, uphold the regional framework with ASEAN at its core and facilitate regional development and prosperity.

Lee, for his part, said that the ASEAN-China relations have improved comprehensively during the past 30 years, which conforms to the fundamental interests of both sides and contributes to regional stability, openness and cooperation.

Singapore supports ASEAN countries and China to celebrate the 30th anniversary of ASEAN-China dialogue relations, to consolidate the regional cooperation mechanism, and to provide new development opportunities for both sides, the prime minister said.