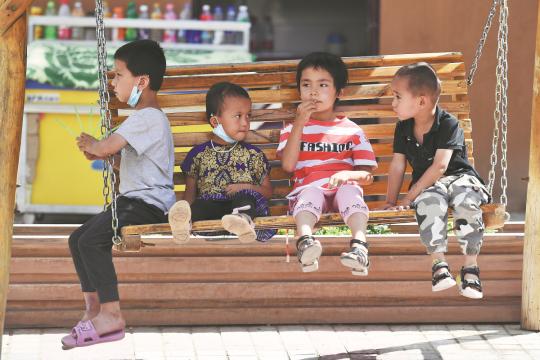 Hospitals in region provide evidence to show allegations are false

Arezgul Tursun, head of the gynecology department at a hospital in the Xinjiang Uygur autonomous region, examined forms signed by women consenting to the insertion or removal of intrauterine devices.

She then produced figures for the number of women who underwent such procedures involving the long-term contraception devices from the start of this year until May 20.

"We conducted 97 procedures during this period. The number of women choosing to use IUDs for contraception has dropped sharply in recent years," Arezgul said in the consultation room at the township hospital in Yarkant, the most populated county in southern Xinjiang's Kashgar prefecture. Uygurs comprise more than 96 percent of the county's population.

"Our hospital is the first place local women visit if they want to learn about family planning options or have IUD insertion surgeries, so I believe the situation in my department can easily counter rumors that Uygur women are forced to have IUD procedures or are even sterilized systematically," Arezgul said.

Claims of forced contraception and forced sterilization in Xinjiang, first made by German anti-China figure Adrian Zenz, were quickly used by some Western politicians as a weapon to attack Xinjiang's human rights situation.

In Zenz's "research report" published in June last year, he erroneously claimed the Chinese government imposed contraceptive surgeries on Uygur women with one child, and sterilization on such mothers with three children.

The report was later quoted by former US secretary of state Mike Pompeo as the United States leveled allegations of genocide in Xinjiang. Despite the accusations, since 2010, the region's Uygur population has risen by 1.62 million, or 16.2 percent, to more than 11.62 million last year, the latest census data show.

Much of the data in Zenz's report were soon found to be inaccurate, or false. For example, a chart claims that on average, 800 to 1,400 new IUD placements per person are performed in Xinjiang each year, which means each woman in the region would have to undergo four to eight such insertion surgeries every day.

In a report published in May, the Xinjiang Development Research Center said the figures simply do not make sense.

Zenz also claims that in 2018, at least 80 percent of new IUD insertion surgeries in China were performed in Xinjiang.

According to the China Health Statistics Yearbook 2019 published by the National Health Commission, 328,475 such surgeries were performed in the region in 2018, and the nationwide figure was 3,774,318. This means that new IUD placement surgeries in Xinjiang accounted for only 8.70 percent of the national total and that the number cited by Zenz was far from accurate, the center's report said.