Xi Jinping -- Leading CPC to strive for a better world 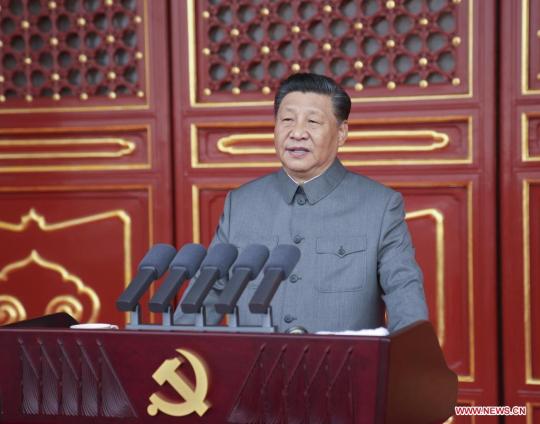 Xi Jinping, general secretary of the Communist Party of China (CPC) Central Committee, Chinese president and chairman of the Central Military Commission, delivers an important speech at a ceremony marking the centenary of the CPC in Beijing, capital of China, July 1, 2021. [Photo/Xinhua]

"What we Chinese Communists are doing is to better the lives of the Chinese people, rejuvenate the Chinese nation, and promote peace and development for humanity."

Addressing over 600 representatives of political parties from over 120 countries at a high-level dialogue in 2017, Xi Jinping, general secretary of the Communist Party of China (CPC) Central Committee and president of China, laid out the historic mission of the world's largest political party.

Committed to the party's original aspiration, Xi is leading the CPC not only to build China into a modern socialist country but to create a better shared future for the world.

A day before the official centenary of the CPC on Thursday, China, after a 70-year fight, was officially declared malaria-free by the World Health Organization, which marks the latest of the numerous achievements China has made under the CPC's leadership.

In February, Xi announced that China, with a population larger than 1.4 billion, had secured a complete victory against poverty, which was widely acclaimed as a miracle in the human history of poverty reduction.

While striving to improve the wellbeing of its own people, the CPC has also been committed to promoting the world's common development. In his 2017 New Year speech, Xi said the Chinese people "hope for a better life for people in other countries as well as for themselves." And he has been leading China to make that hope come true.

Whether in the fight against malaria or in poverty alleviation, China has over the past decades extended a helping hand to others, especially developing countries.

Back in 2000, Xi, then governor of southeastern China's Fujian Province, helped launch a pilot Juncao project to help improve the livelihood of the Papua New Guinean people.

Juncao, famed as "magic grass" and discovered by Chinese scientists, is an economical and environmentally friendly substitute for timber, which can be used as a substrate for growing mushrooms.

Eighteen years later, during Xi's state visit to the Oceanian country, the two countries signed another aid project using the grass technology. By 2023, the aid program is expected to lift 30,000 local people out of poverty.

Today, the Juncao project has taken root in over 100 countries, helping combat poverty in developing countries in Africa, Asia and the South Pacific region.

"China cannot be separated from the world in achieving development, and the world also needs China for prosperity," Xi said at the 20th meeting of the Council of Heads of State of the Shanghai Cooperation Organization in Beijing via video link.

When he visited the UN headquarters in the fall of 2015, Xi brought a gift for the United Nations' 70th birthday -- "Zun of Peace," a red bronze bottle decorated by traditional Chinese auspicious patterns.

It shows the aspiration and faith of the Chinese people in seeking peace, development, cooperation and win-win results, which are also spirits of the UN Charter, Xi explained.

Under the CPC's leadership, China is marching towards the second centenary goal -- to build China into a great modern socialist country that is prosperous, strong, democratic, culturally advanced, harmonious and beautiful by 2049, the centenary of the People's Republic of China.

"China the lion has awakened, but it is a peaceful, amicable and civilized lion," Xi said in 2014 at a gathering marking the 50th anniversary of the establishment of China-France diplomatic relations, stressing that the Chinese Dream is about pursuing peace, questing for happiness, and contributing to the common good of the world.

Today, China is the second largest contributor to the UN peacekeeping budget, and has sent more peacekeepers to UN missions than any other permanent member of the UN Security Council.

"Countries, whether big or small, strong or weak, rich or poor, should all contribute their share to maintaining and enhancing peace," Xi said in April 2013 at the opening plenary of the Boao Forum for Asia Annual Conference, the first multilateral diplomatic event he hosted as Chinese president.

As the world is facing changes unseen in a century, Xi has led China to become a staunch champion of genuine multilateralism defending the international order against such challenges as unilateralism and bullying.

There is no better choice for world countries other than strengthening multilateral cooperation in the face of one global challenge after another, Xi told UN Secretary-General Antonio Guterres on the sidelines of the G20 summit held in Buenos Aires in November 2018.

Mankind is in an era of major development as well as profound transformation and change, and is also in an era of numerous challenges and increasing risks, Xi noted in his 2017 landmark speech at the United Nations Office at Geneva.

Answering the fundamental questions of what has happened to the world and how to respond, Xi offered China's proposition: build a community with a shared future for mankind, a concept that has been enshrined in the CPC's constitution and has also been guiding China's interaction with the rest of the world.

In face of the unprecedented COVID-19 threat, China, the world's largest developing country, has effectively put the disease under control at home, and has meanwhile spared no effort to help other countries.

In 2020, Xi promised that Chinese COVID-19 vaccines, when available, "will be made a global public good." Now despite a tight supply and huge domestic demand, China has provided over 450 million doses of COVID-19 vaccines for the international community, and is continuing to help ensure vaccine accessibility and affordability worldwide.

Xi's vision of building a community with a shared future for mankind offers not only a new solution to global challenges, but also a new perspective on world civilizations.

While in the West there has been such rhetoric as the clash of civilizations or the superiority of one civilization over another, in Xi's eyes, the development of a civilization is sustained by exchanges and mutual learning.

That is in line with the future of the world he has been leading the CPC to strive for -- an open, inclusive, clean and beautiful one that enjoys lasting peace, universal security, and common prosperity.

"Countries may have differences and even encounter problems with each other," said Xi. "But we should not forget that we all live under the same sky, share one and the same home planet and belong to one and the same family."