Nothing to fear, but a lot to admire, says Beijing envoy 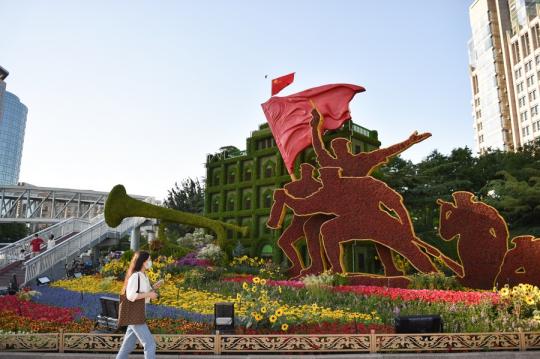 A woman walks past flower decorations set up along Chang'an Avenue in Beijing, capital of China, June 19, 2021. （Photo/Xinhua）

China is also committed to the path of peaceful development, Zhang said in remarks made at the opening on Friday of an online photo exhibition to celebrate the coming 100th anniversary of the establishment of the Communist Party of China.

"China will not hit the well-trodden path by which a growing power is bound to seek hegemony," Zhang said.

The exhibition, which chronicles the history of the Party over a century, is jointly organized by the consulate general and China's State Council Information Office.

"Over the past 100 years the CPC has endured great hardship in its pioneering cause and undertaken a magnificent historical journey," Zhang said. "The CPC has remained firmly committed to its aspirations and forged ahead relentlessly, producing today's glory."

Zhang said he hopes the exhibition will help people understand the CPC.

The CPC was founded as China was embroiled in domestic turmoil and external threats, as its people fought against feudal rule and foreign aggression as the workers' movement fully adopted Marxism, Zhang said.

Its founding profoundly changed the history of modern China, the fate and future of its people and the direction and pattern of world development, he said.

Under the leadership of the CPC, the Chinese people "completed the broadest and most profound social transformation in the history of the Chinese nation, embarked on the path of socialism with Chinese characteristics and created economic and social development miracles with remarkable achievements", Zhang said.

China has made great strides in economics, science and technology, living standards and overall national strength, he said.

The CPC is committed to a people-centered approach and regards as its goal people's aspirations to live a better life, he said.

"Putting people's safety and health first, the CPC and Chinese government have led an all-out fight against COVID-19, marking a major strategic achievement in fighting the virus."

After years of effort, the CPC has also eliminated absolute poverty, a miracle in humanity's fight against poverty, he said.

In addition, it has established the world's largest system of social care, covering 1.4 billion people, which has given them "a much stronger sense of gain, happiness and security", Zhang said.

"The CPC … has won the wholehearted endorsement of the Chinese people. … This is the fundamental institutional guarantee for the development and progress of contemporary China."