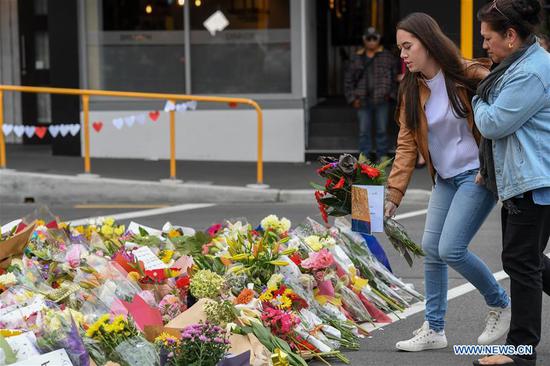 A woman places flowers to mourn the victims of the attacks on two mosques in Christchurch, New Zealand, on March 16, 2019. It was revealed that a 28-year-old Australian man, Brenton Tarrant, conducted terrorist attacks targeting mosques in Christchurch and later was arrested by New Zealand Police. At least 49 people were killed and 48 are hospitalized now. (Xinhua/Guo Lei)

The New Zealand government is launching a program of work to strengthen social cohesion in the country and create a safer, more inclusive society.

The work is part of the wider response to the recommendations from the Royal Commission of Inquiry into the March 15 terrorist attack on two Christchurch mosques in 2019, and builds on existing initiatives by the government to strengthen social cohesion, a government statement said on Friday.

The government aims to build New Zealand as a place where everyone feels safe, valued, heard, has a strong sense of belonging, and is able to participate fully in society, Associate Minister for Social Development and Employment Priyanca Radhakrishnan said in the statement.

The government also started public consultation on proposed changes to the Human Rights Act 1993 to strengthen protections against speech that incites hatred and discrimination, and seeking New Zealanders' views about how they would make New Zealand more socially cohesive, Radhakrishnan said.

Public submissions for the work program are open from June 25 to August 6.