Construction progress of China-Laos Railway on schedule despite pandemic 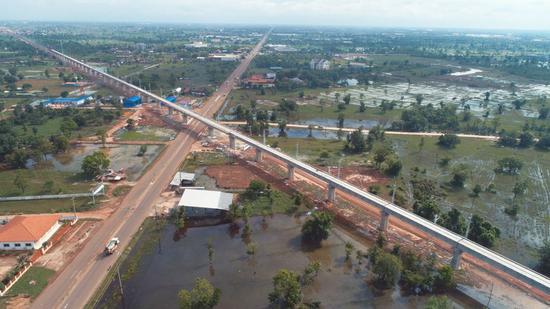 Photo taken with a drone on June 15, 2021 shows the Phonethong super major bridge under construction in Vientiane, Laos. (CREC-5/ Handout via Xinhua)

Despite the impact from the COVID-19 pandemic, both Chinese and Lao engineers are striving to complete the construction of the China-Laos Railway and put it on operation in the coming December as scheduled.

"It will be on December 2 when we are to complete the railway construction and make it ready for full operation," Xiao Qianwen, general manager of the Laos-China Railway Co., Ltd., a joint venture based in Lao capital Vientiane for the construction and operation of the first modern railway in the country, told Xinhua on Friday.

"We are not changing the timetable and we are striving for that goal, with over 90 percent of the engineering work done, and our preparation for the operation is well on the way."

In the southern end of the railway in Vientiane, the China Railway No. 5 Engineering Group (CREC-5) has completed the construction of the main structure of the longest bridge along the China-Laos Railway, the Phonethong super major bridge with a length of 7,528.56 meters and 231 piers.

In the northern end of the railway, the China Railway Construction Engineering Group (CRCEG) roofed the Lao border gate station in Boten On June 15, while the same Chinese company ceiled the top of the first railway station in Nateuy, some 360 km north of Lao capital Vientiane, nine months ago on Sept. 16, 2020.

"We will installed all the tracks by mid-August," Lei Chao, a China Railway No. 2 Engineering Group (CREC-2) railing base project manager, told Xinhua on Friday in Vientiane.

Lei said the CREC-2 teams are carry out strict precaution measures against the COVID-19 pandemic as to achieve uninterrupted construction of the project with zero infection case. The company kicked off the track laying on March 27, 2020.

According to Xiao Qianwen, most of the construction sites are located in tropical mountainous areas, with complex geographical conditions and poor traffic conditions, resulting in difficulties for the construction.

Especially during the rainy season, the machinery can not get access to the construction sites and sometimes the Chinese engineering teams even have to turn to the piggyback transportation to carry large amounts of the needed materials and equipment.

The China-Laos Railway's construction has been confronted with huge challenges and difficulties during the pandemic, but the construction progress in an orderly and balanced manner has boosted the confidence in the timely completion of the railway in this December, Bounthong Chitmany, vice president of Laos, said when talking to Xiao Qianwen in the Lao presidential palace on June 15.

The deputy prime minister, on behalf of the Lao government, hailed and progresses and achievements of the China-Laos Railway construction amid the epidemic, saying that the railway is a landmark project of the friendship between Laos and China and its completion coincides with the 60th anniversary of the establishment of diplomatic relations between China and Laos, which is of great significance.

Both sides must cooperate to efficiently advance the remaining work, complete the construction and start the operation on schedule, and live up to the ardent expectations of the two parties and the two peoples, said Sonexay.

"The COVID-19 pandemic has brought many difficulties to the Lao people, and thus, I especially expect the railway to be open to traffic this year, which is something the Lao people have been dreaming for a long time," said Somphone Inleuangsy, aged 24, from Luang Namtha, a mountainous province in northern Laos that borders China. He is currently receiving training at the CREC-2 railing base on the northern outskirts of Vientiane.

She told Xinhua "There is a Chinese saying 'to get rich, build roads first,' and I hope Laos, with the Laos-China railway, will become prosperous soon. I also hope Laos will become a transportation hub in Southeast Asia to drive the development in the region."

"As a female, among all over 600 trainees of the China-Laos Railway, I feel very honored and proud. I hope that I can become a formal railway employee after the training, and I hope my parents can see how I drive a train," Somphone said. "I also hope that with the opening of the China-Laos railway, more Chinese friends can come to help the development here."

At present, a total of 636 Lao youngsters are trained for the future operation of China-Laos Railway, working as train drivers, equipment and infrastructure maintenance personnel.

"In the past two years, the cooperation between Laos and China has been outstanding. Especially, the first modern Vientiane-Vangvieng Expressway in Laos has been put into operation through cooperation, and the high-speed Laos-China Railway will be completed by the end of this year," said Valy Vetsaphong, Lao Prime Minister's advisor and vice president of the Lao National Chamber of Commerce and Industry.

"This is due to the policy coordination between the two countries, and the dovetail between Laos' strategy to convert from a landlocked country to a land-linked hub and China's Belt and Road Initiative."

Valy told Xinhua "The Laos-China Railway will lay a new foundation for the introduction of foreign investment, and Laos will surely take the advantage to participate in the regional and global industrial chain. In other words, the China-Laos Railway will not only promote bilateral trade, investment and people-to-people exchanges, but also benefit the countries to be connected. I believe that the completion and operation of the Laos-China railway will promote the post-pandemic recovery of neighboring countries and the whole region."

The over 400 km railway will run from Boten border gate in northern Laos bordering China to Vientiane with an operating speed of 160 km per hour.

The electrified passenger and cargo railway is built with the full application of the Chinese management and technical standards. The construction of the project started in December 2016 and is scheduled to be completed and open to traffic in December 2021. E