Just as Edgar Snow did many years ago, Ian Goodrum, an American communist, has come to China to see why and how the Communist Party of China works in China.

In Shanghai, he came across Xu Jinfa, a PLA veteran. The 78-year-old told him how fast Shanghai had grown over past decades, reflecting the PRC's rapid growth and development over its 72-year history. 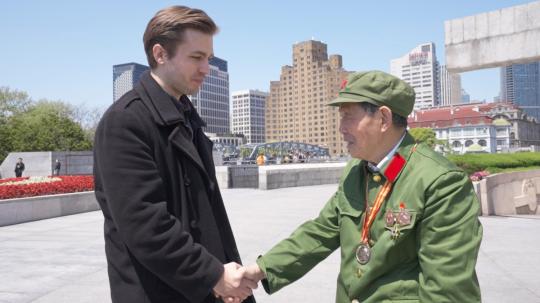 "I was 7 when Shanghai was liberated. In my childhood, Pudong was a rural and agricultural place, with grass growing all around," Xu said, while pointing to the bustling skyscrapers in Shanghai's Pudong.

From Tao Wenzhao, deputy dean of the School of Marxism Studies at Renmin University of China, Ian Goodrum realized the role of the CPC's capability to pool resources in its wonders.

"In its early years, New China was weak, with limited resources. Under extremely difficult conditions, we achieved something big through concentrating national resources," Tao told him. 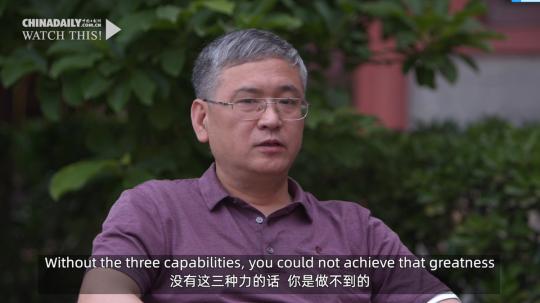 Cheng Meidong from Peking University, talks with Ian Goodrum in Beijing in May. (Photo/chinadaily.com.cn)

"The CPC has a strong capability to lead, a scientific method to make decisions and a capability to unite people and get support from people," Cheng told Goodrum.

And the Party's mature system to select and promote officials also matters a lot.

"Every CPC official that reaches the pinnacle of the leadership structure must have been effective in a variety of challenging assignments, starting in the places most in need," said Laurence Brahm, senior international fellow at the Center for China and Globalization.

Brahm said this ensured the officials could make the right decisions in demanding moments. "It's a huge collection of hands-on experience, not just theory."

Tao also mentioned the Party's ability to make and implement both short- and long-term planning.

"The plans China made for modernization last for 50 years or 100 years," Tao said. He drew a comparison with some political leaders in other countries, saying what they cared about are mainly short-term and local interests.

Thanks to all these special traits, the CPC has done an excellent job in governing the nation. China has created more green area than any other nation. It is reaching for the stars as it sends missions to Mars and astronauts to its own space station.

Looking to the future, Ian Goodrum is expecting more.