Elephant herd on the move after break 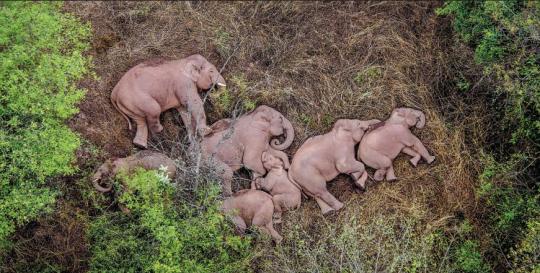 Wild Asian elephants take a break on Monday in Jinning district of Kunming, Yunnan province. The herd has made a temporary stop along their migration in Kunming's outskirts, authorities said on Monday. One male in the 15-strong herd has broken away and is now about 4 km northeast of the group, according to authorities. Asian elephants receive the highest level of State protection in China and are mostly found in Yunnan. (PROVIDED BY YUNNAN FOREST FIRE BRIGADE)

A herd of roaming elephants that left its habitat in the south of Yunnan province is continuing its journey after a short break and is moving east toward Yimen county, forestry authorities said on Tuesday.

The herd, which left the Xishuangbanna National Nature Reserve last year and started marching north, arrived at a forest outside a village in Xiyang township, about 90 kilometers southwest of Kunming, Yunnan's provincial capital, on Monday.

A male elephant left the group on Monday for unknown reasons but is only about 4 km from the herd.

The provincial forestry department said the herd stopped and took a rest in a suburban part of Kunming, which has witnessed frequent thunderstorms in the past two days.

Experts said the weather conditions and the male's absence were the reasons the herd took a short break.

As of Tuesday afternoon, the herd was continuing to move toward Yimen county.

"If the herd heads north, to downtown Kunming, we will try to lead them in another direction with food," said Chen Fei, director of the National Forestry and Grassland Administration's Asian Elephant Research Center.

Authorities have marshaled extraordinary resources to monitor the herd and keep it away from residential areas. Local authorities in the places visited by the elephants have all carried out comprehensive response plans to ensure the safety of both humans and the elephants.

Forest fire brigade and public security departments at the provincial and township levels have dispatched teams to track the elephants round the clock.

On Monday more than 410 emergency personnel, 374 vehicles and 14 drones were deployed with more than 2 metric tons of elephant food in continuing efforts to lead the elephants away from inhabited areas and evacuate people in their path.

Asian elephants are under first-class State protection in China and are listed as endangered by the International Union for Conservation of Nature's Red List of Threatened Species. The country's wild Asian elephant population has grown from 175 in the 1970s to about 300.

The migration of the wild elephants has captured international media attention. Outlets including TV Asahi, the BBC and The New York Times have reported on the animals' ongoing journey and sought to analyze the reasons behind the migration.