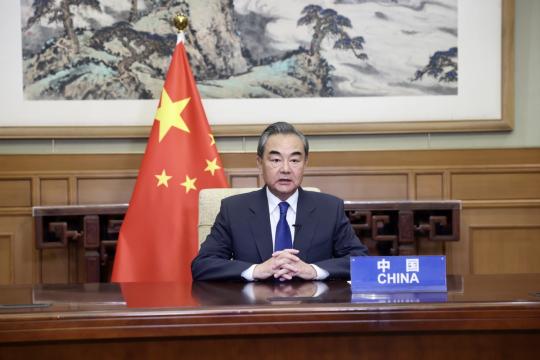 China will continue to work with the Association of Southeast Asian Nations to encourage all parties in Myanmar to remain calm, end all violence and engage in political dialogue for the good of Myanmar people's interests, State Councilor and Foreign Minister Wang Yi said on Monday.

China generally shares the same position and view with ASEAN regarding the current situation in Myanmar, Wang said as he held talks with Brunei's Second Minister of Foreign Affairs Erywan bin Pehin Yusof.

Wang said that China and ASEAN will jointly urge all countries to abide by the purposes and principles of the United Nations Charter, and avoid unilateral sanctions and improper intervention.

China will also work with ASEAN to provide assistance to Myanmar to contain the spread of the COVID-19 pandemic, resume economic recovery and improve livelihoods to guarantee the interests and rights of people at the grassroots level, he added.

Erywan, who briefed Wang on his recent visit to Myanmar, said that ASEAN appreciates and supports China continuing to play an important constructive role regarding the situation in Myanmar.

The foreign officials are currently in the southwestern Chinese municipality of Chongqing to attend the Special ASEAN-China Foreign Ministers' Meeting in Celebration of the 30th Anniversary of Dialogue Relations from Monday to Tuesday.

During his talk with Locsin, Wang asked Beijing and Manila to remain focused and calm in the face of words and deeds that attack and smear their mutually beneficial cooperation.

The two countries should focus on pushing for more progress to be achieved in bilateral cooperation in order to bring more benefits to their two peoples, he said.

Wang stressed that political conditions are never attached to China's cooperation with the Philippines. That so-called trap does not exist, he said.

Locsin agreed with Wang's remarks, saying that there is no such thing as a so-called trap in Philippines-China cooperation and China has been trying to use its own development to promote the common development of all countries.

He said that his country opposes the politicization and weaponization of human rights issues and believes that every country is entitled to maintain its own security and stability in an appropriate way.