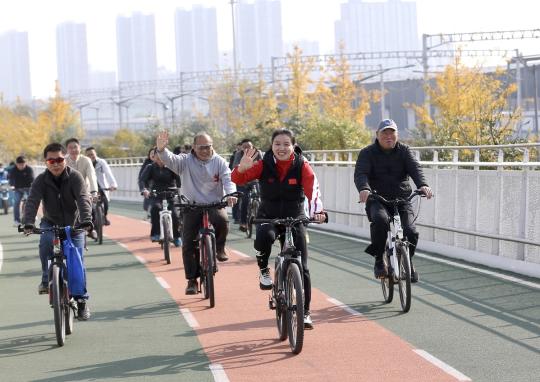 Bikers participate in a cycling event in Beijing. (Photo by Zou Hong/chinadaily.com.cn)

Two years ago, Beijing opened its first bicycle-only route. Beijing Municipal Commission of Transport data show that 3.18 million cyclists have used the route since, which means an 800-ton reduction in carbon emissions.

That apart, the bicycle lane on Beijing's second ring road is being upgraded. Once completed, expectedly by end of June, the width of the lane will have been increased from 2 meters to 3 meters.

These moves show that the Beijing municipal authorities are serious about creating a low-carbon, green and environmentally friendly traffic system.

In recent years, urban residents have increasingly adopted bicycles as a green means of transport, cycling to work and back, and to go shopping, even taking their kids to school. Bicycles have already become an essential part of people's daily lives.

The shift isn't always guided by the low-carbon principle. It is more convenient too. Parents seldom find parking lots near schools. Even bus stops may not be close by. A bicycle thus comes in very handy to drop or pick up kids from school.

Even office-goers prefer cycling to work to avoid walking that extra mile or so from subway stations to their office buildings.

That is why the number of cyclists has grown significantly. In 2019 alone, Beijing saw 540 million cycle rides, accounting for 6.4 percent of all local trips.

Because of this changing trend, local governments need to improve infrastructure and services, such as the opening of bicycle-only routes and the widening of bicycle lanes.

Such moves will be in accordance with the nation's green development philosophy. Even during this year's two sessions, carbon peak and carbon neutrality were high on the agenda, and for the first time were mentioned in the Government Work Report.

It is necessary to put in more efforts to realize the green goals for every city. Beijing has taken the lead in the march toward a greener life. Let us hope other cities follow suit.