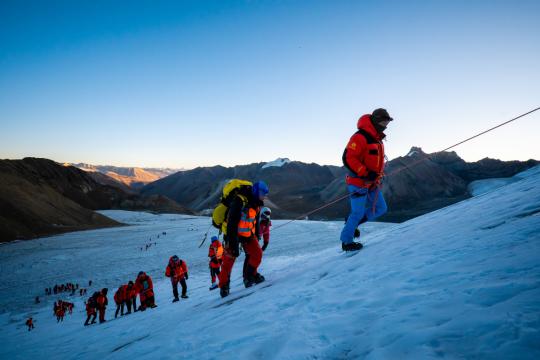 The Tibet autonomous region has beefed up efforts to ensure the safety of its spring climbing activities, including more measures to curb the risk of COVID-19 infections, according to Tibet Sports, the official WeChat account of the Tibet Sports Bureau.

During this year's spring climbing season, between March 31 and May 20, a total of 38 people have been allowed to climb Qomolangma－known as Mount Everest in the West－from its northern side in China, said the bureau.

Approval for the 38 to climb the world's highest mountain was made following an inspection by the General Administration of Sport.

All the climbers are from areas of China that are at low risk of COVID-19. To prevent any possible risk of infection, the climbers were put under strict management and received three temperature checks each day they stayed in Lhasa, capital of Tibet.

Nyima Tsering, head of the bureau, said it set up a special group to prevent the potential risks of an outbreak among climbers, as well as handle emergency cases and protect the environment in the area.

He added that in order to prevent climbers from Qomolangma's northern side, in China, from meeting those from the southern side, in Nepal, the Chinese side would "pay close attention to the climbing schedule of the Nepalese side".

"All the climbers are required to keep a personal distance of at least 4 meters after ascending to the summit of Qomolangma, which is a measure to prevent the risk of infection," he said.

All climbers are required to wear oxygen masks, which can protect their health while also supplying oxygen to them, he added.

In addition to these measures, a temperature detection area has been set up 100 meters from the base camp of Qomolangma at an altitude of 5,200 meters above sea level, which provides supplies such as masks, disinfectant and thermometers.

Anyone entering or departing from the base camp is required to register, have their temperature checked and use disinfectant.

People who are not part of the spring climbing expedition are not permitted to enter the base camp. The climbers' camps are also disinfected daily.

Nyima Tsering said an alpine environment protection team was set up to clean the base camp and climbing routes up to the summit, and all of the waste collected would be safely disposed.

A professional mountain rescue force has been set up at the base camp to perform rescue missions, he added.

In April, the General Administration of Sport and the Tibet Sports Bureau issued a notice requiring climbers to send an application to the bureau at least a month in advance of their planned ascent.

It said that climbing without a permit would be strictly prohibited.

Last spring, Tibet suspended its climbing services for foreign teams due to the COVID-19 pandemic. However, the region continued its annual mountain cleaning.

More than 6 metric tons of waste was collected in three weeks on three mountains in the region in April 2020.

In 2019, 362 people climbed Qomolangma from the Chinese side on the northern slopes of the mountain, with 241 of them making it to the summit.

Nepal, on the southern side, issued a record 394 permits for people to climb Qomolangma this spring, which broke the earlier record of 381 permits issued in 2019, Xinhua News Agency reported the Department of Tourism of Nepal as saying.

Several climbers have been flown out of the Mount Everest Base Camp on the Nepalese side after reporting symptoms of COVID-19, and tested positive after reaching Kathmandu, the nation's capital, the New York Times reported on Wednesday.

Last month, Polish climber Pawel Michalski said on Facebook that "more than 30 people have already been evacuated (by air) to Kathmandu, with suspicion of pulmonary edema－later found to be positive for coronavirus," reported Abilene Public Radio in the United States.

Prem Subedi, the undersecretary at Nepal's Ministry of Culture, Tourism and Civil Aviation, told the BBC, "None of the COVID cases at Everest Base Camp have been reported so far to the ministry."