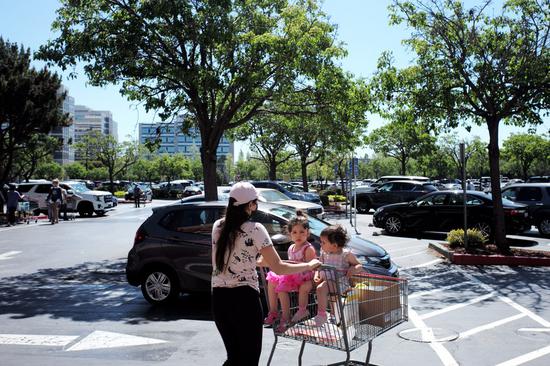 People walk to the parking lot after shopping at a supermarket in San Francisco Bay Area, California, the United States, May 4, 2021. (Xinhua/Wu Xiaoling)

The latest provisional data released by the Centers for Disease Control and Prevention (CDC) showed the birthrate in 2020 dropped for the sixth consecutive year. The steepest decline occurred in the last part of the year, when the first babies conceived during the U.S. outbreak would have been born.

Before the pandemic, American women were already having fewer children, doing it later in life or choosing to not have children at all. The newly released data indicated a sharpening of that trend. The U.S. birthrate fell across races, ethnicities and almost all age groups.

Roughly 3.6 million babies were born in the United States in 2020, a decline from about 3.75 million in 2019. It is the lowest number of births since 1979. It is also the largest one-year drop in births, in percentage terms, since 1965, the year the baby boom ended, Philip N. Cohen, a sociologist at the University of Maryland, was quoted as saying.

"While the pandemic may have accelerated the decline, it did not cause it; the slowdown had been ongoing for decades before the pandemic," reported the Post. Even before the coronavirus's onset, the birthrate had fallen to 1.73 births per woman, after peaking in 1957 at 3.77 births per woman. It dipped in 1980, increased slightly a decade later and has since continued on a steady decline.

"Some of the things that might be driving down birthrates in the long run -- like economic insecurity, the cost of health care, housing, child care and education, and our awful work-family policies -- are probably things that were exacerbated in the last year," Cohen said.

By disrupting American society in so many ways, the pandemic has led some people to hold off on plans, experts believe, with the prospect of children more daunting in the face of job losses, closed child-care centers and schools and social isolation, according to the report.

"It also slowed down the social metabolism, so there was less social interaction, and that means less sex, less coupling and marriage and pregnancies," Cohen said. "I'm sure there is both a conscious and unconscious element to this, and we just don't have enough data yet to know for sure what that balance is."